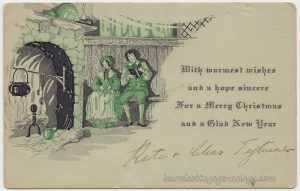 Find the “hidden” cat on this card!

A charming American Colonial or Old English style illustration in black and green….

and a hope sincere

For a Merry Christmas

and a Glad New Year.”

Deciphering the surname of Kate and Charles was a good challenge, and after some tries we found the best guess to be Tegtmeier, or not quite so likely, Fegtmeier, and there are at least two couples that might fit, one in New York and the other in Illinois, from census records. 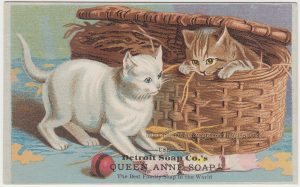 This is the third trade card that we’ve found so far, for Queen Anne’s Soap and the Detroit Soap Company. See the prior post for the second. 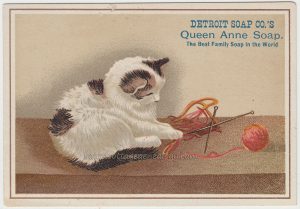 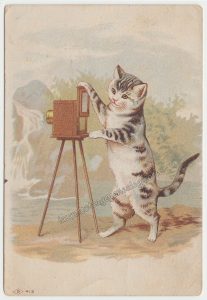 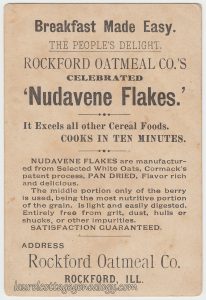 From a Throwback Thursday entry from Rockford Buzz:

“The A. M. Johnston Oat Meal Company, said to have been the first oatmeal mill west of the state of Ohio, was located in Rockford in the 1870’s. This firm later became the Rockford Oatmeal Company, and eventually the American Cereal Company, which was the forerunner of the Quaker Oats Company.”

Numerous newspaper ads can be found for Nudavene Flakes and Cormack’s Nudavene Flakes. The example below, from June 1895 in the Detroit Free Press, shows a listing of a particular Monday’s prices from the Hull Brothers Company. Ten pounds of Nudavene Flakes for 25 cents, imagine! (Or, ten pounds of anything for 25 cents.) And how ’bout the canned brook trout and mackerel, there’s a couple of items we don’t see on the shelves anymore. (That’s a typo on the word “Sardeiles.” It should be “Sardelles” – a term used for a small sardine-like fish.) 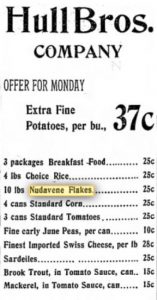 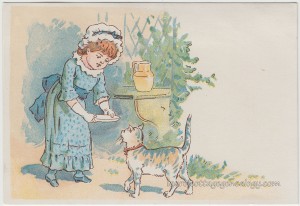 Here’s a lithograph from an unknown company of a little lady, perhaps the domestic help, giving the family kitty cat a saucer of milk. I love the expectant pose of the kitty; the lady’s ensemble with mob cap and flounced dress with large bow in the back, and her fingerless gloves; and the background showing the pitcher of milk on the little wooden stand, with the greenery in front of what appears to be a leaded glass diamond patterned window. 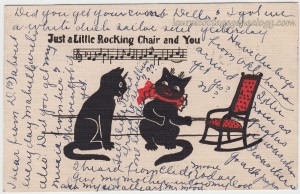 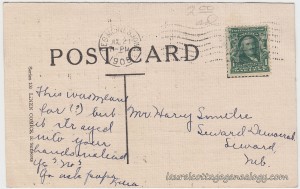 Here’s the second postcard we have for the likely publisher of R. L. Wells. (See prior post.) This one shows one kitty, who wears a red bow, inviting another kitty to sit down in a rocking chair. The caption is  “Just a Little Rocking Chair and You”  with a treble clef staff underneath. This postcard caption is the title of a song: music by Theodore Morse, lyrics by Jack Drislane and Bert Fitzgibbon, released in 1906. The sheet music cover below shows singer Ada Jones. 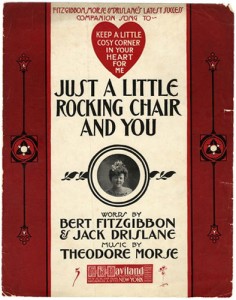 Card addressed to:  “Mr. Harry Smithe, Seward Democrat, Seward, Neb.”  To the left of the address was written  “This was meant for [?] but it strayed into your hands instead. Yes? No? Go ask papa.  [?]”

The front of the card may or may not have been written by the same person as the above message and says,  “Did you get your comb Della? I got me a white [?] sailor suit yesterday. Have the boys from Oklahoma arrived yet. Yes? No? Is the noise as great as it was when I was there go ask papa. I hear from D. (?) about every day. Mabelle writes[?] also. Did you get my music[?] from her? I haven’t got it yet. Tell Clide I was afraid to send him one like this ??? I heard from Clide Moore today. Give my mother-in-law my love. Also my [?]  Mr. Moore”

Thanks to the corrections (see comment below) from Leo, we found that Harry or Harvey, was William H. Smith, born in 1873 in Henry County, Illinois, son of William L. Smith and Maria (Edwards) Smith. William H. Smith came to Seward about March 1897 and bought the Seward County Democrat and then the Independent, consolidating them into the Seward Independent Democrat. Della (Fletcher) was his wife. They were married June 12, 1901 in Seward.

This card is rather fascinating for the message content and writer’s or writers’ style:  Why was the sender afraid to send a postcard like this to Clide? Funny – the whole “Yes? No?” thing, and how did the postcard stray into someone else’s hands? And the “Go ask Papa” refrain would make a good song title. Speaking of which, the short research into old song titles leaves me wondering (as per usual) what we’re currently missing. Just the titles alone are worth looking at, and what about all of the music – the catchy tunes, the charming and often comic lyrics, the insight into a prior century, etc. 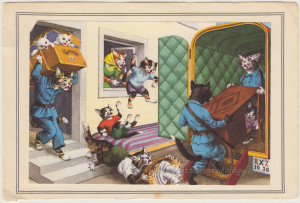 The “kitty kids” are having a high time of it here while the “kitty movers” are looking understandably a bit beleaguered. There’s the mom in the window (trying unsuccessfully to contain one of her charges?) and maybe that’s the dad trying to help, but tripping with the stack of dishes. This is one of the many colorful and comical drawings by Swiss artist Eugen Hartung (1897-1973) commonly called “Mainzer Cats” referring to publisher Alfred Mainzer of New York. (They were first published in Zurich by Swiss publisher Max Kunzli and known as “Kunzli Cats”.) The majority of Hartung’s dressed animal drawings were kitty scenes which often included other animals, like mice, dogs and birds; many of the other animals were anthropomorphized like the kitties here, but some were not, depending upon what was needed to tell the story.

This card (possibly originally a postcard) was trimmed a little on both sides and pasted to fit in the card “frame” by someone. This cut off the artist’s heart-shaped logo that, on this one, would have appeared at the bottom left. It was given to a friend so is only up for display on this website but can be found for sale on other sites.