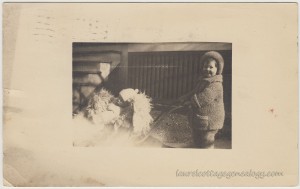 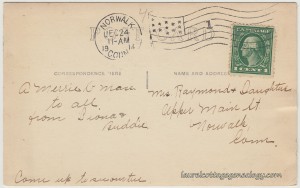 “A Merrie Xmass to all from Liona & Buddie. Come up to see our tree.”

Two adorable kids bundled up for winter. The one, about three or four, pushes the other, about one year old, in a stroller. One might think that’s Buddie on the right and Liona on the left, but the names could be for the parents, instead. Nothing definitive shows up in Norwalk for them and same for the addressees. But on a different note, the outfit of the older child might remind you of those little Christmas-y figurines of the kids all bundled up in white – I found out that they are called “Snow Babies” and there are modern collectibles as well as antique figurines. 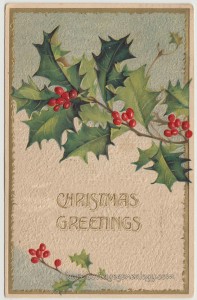 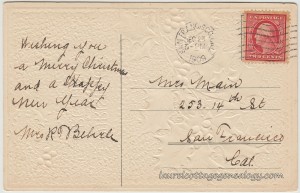 “Wishing you a Merry Christmas and a Happy New Year. Mrs. R. Behrle.”

Another in the Ethel Main Collection, and a beauty – holly and berries on a background of pale blue and cream, with a gold-tone border. The holly, lettering and border is embossed but the background has a smaller embossing to give it a textured look. Notice on the larger sprig of holly, the brown stem sticking up at the top right, with the very small leaf – a realistic touch, since if you were to take a cutting from a tree or plant you’d not normally find each leaf, berry or whatever in top form. It’s the little details like this that let us see into the thought process of the artist. 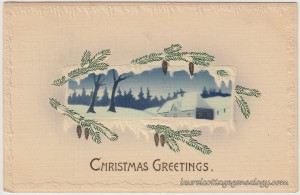 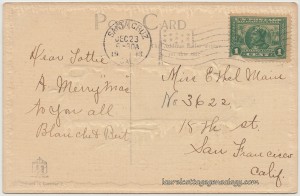 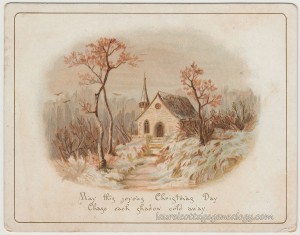 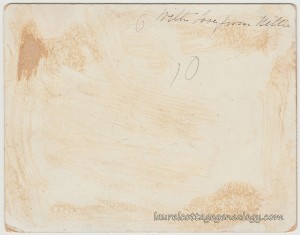 “May this joyous Christmas Day

Chase each shadow cold away.”

A Christmas card on heavier stock, done in brown tones, of a quaint stone church in a country setting. The back shows,  “With Love from Nettie.”

The name Nettie was not uncommon at one point. This card is estimated to be from about the 1890s. Nettie may have been a nickname for Annette, Anita, Henriette, Gianetta, Jeanette, or Antoinette, just to name some possibilities. In a quick Ancestry search, the name Nettie comes up most often for women born between about 1870 and 1900, then starts dropping off. Reminds me of the mystery we have on our Irish side, Nettie McPharlin, daughter of Edward McPharlin and Bridget Fosset, “married a Mr. Devett.” What are the odds of this card being from my 3rd-times great Aunt Nettie? Probably about the same as winning the lottery, but it’s a good reminder to renew the search for our Nettie.

I hope you find this Christmas Day

The best you ever spent;

I hope it dawns with happiness

George E. Buzza (1883 – 1957) founded The Buzza Company in Minneapolis, MN and started printing greeting cards in 1910. In 1928 he sold 52 percent of his stock in the company and moved to California. There he went into partnership with a former business associate and was president of the Hollywood greeting card company, Buzza-Cardozo. Buzza was hugely successful and is known for his innovative use of color, and employing well-known artists and writers.

See the detailed Find A Grave entry for George Earl Buzza, as well as the Buzza lofts article below. This Christmas card is the second Buzza card we’ve found, so we’ll start a new website category, and since there are a number of newspapers articles available we’ll put up a separate post for this publisher in the near future (to be able to add a little to others’ excellent research.)

Sources:  Koutsky, L. (2013, April 23) Checking out the buzz at Buzza Lofts. The Journal. Retrieved from:  http://www.journalmpls.com/voices/voices/checking-out-the-buzz-at-buzza-lofts 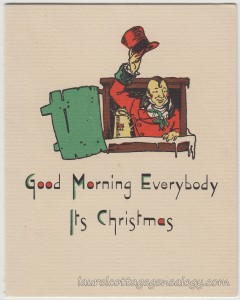 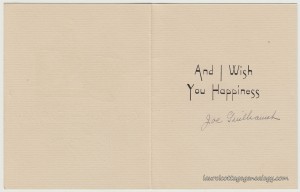 “Good Morning Everybody, Its Christmas – And I Wish You Happiness.”

A perfect card for our Christmas morning, 2015. It shows an illustration of an 19th-Century gentleman doffing his top hat to salute all and sundry this Christmas morn. He appears from the upstairs wooden-framed window, shutter thrown open, and coffee pot resting on the snow-covered window ledge. On second thought, maybe that’s a tankard of ale.

The card is signed but the surname is a little difficult to decipher. After trying multiple possibilities our best guess is Guilbault, so  “Joe Guilbault.” 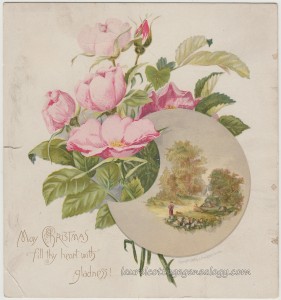 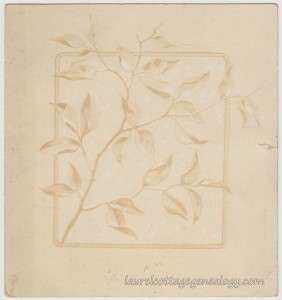 “May Christmas fill thy heart with gladness!”

For anyone tired of the cold and snow, here’s a beautiful bouquet of pink roses and a summery nature scene on an artist’s palette. The little moon-shaped tableau shows a woman in the foreground with a dog, a man seated a short distance behind her, and a church in the far distance. The publisher’s name and date appear below the palette:  Copyright 1886 by L. Prang & Co., Boston.

L. Prang was the influential lithographer and publisher Louis Prang (1824 – 1909) who is referred to as the “father of the American Christmas Card.” His Christmas cards were first offered for sale in the United States in 1874, but he is also well-known for publishing major works of art and maps. He was born in Breslau, Prussian Silesia (now Poland) and died in Los Angeles, California. Photo below courtesy Wikipedia. Check out the two links if you have the time, they are quite interesting reading, and a quick search for online images will bring up many examples in a wide range of art and ephemera. 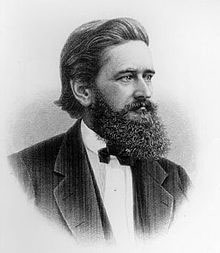 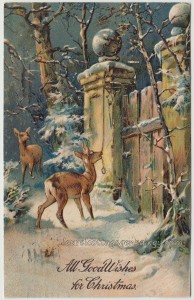 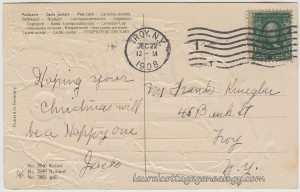 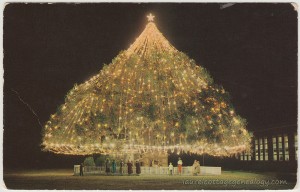 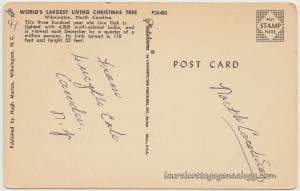 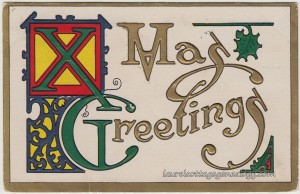 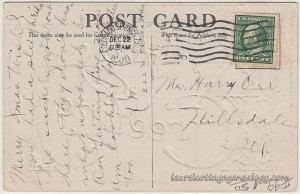 “Merry Xmas. Wish I had a sleighride. No such snow out here. They don’t know what a bob sled is. Am feeling fine now. Am looking for a letter too.  A.W. 1222 N. Cascade Ave.”

What exactly is a bob sled? Have to admit I wasn’t sure. Growing up in Michigan we always either went sledding (the Flexible Flyer type and a little later that aluminum saucer-shaped thing for one person, I think you could tell how much fun you’d had with that one by the number of dents it had accumulated) or tobogganing (similar to the bobsled but with a curled front and without the runners on the bottom). Without getting technical, and just from looking at old photos the bobsled was a multi-person sled that fit two or four persons, sometimes more depending on size, or how many wanted to try to fit at once. Some old bobsled photos show a wheel at the front, some just controls with rope, and some show hitched to a horse. Bobsledding is also called bobsleighing.

The sender, A.W., could be a relative of the Webb family, who were living at 1222 N. Cascade Ave in 1909 (city directory) and showing on the 1910 Federal Census, but there is no one with the first initial “A” in the household in 1910. From the note it sounds like the A.W. was visiting, anyway. But head of household at this address was Dr. Gerald B. Webb. Nothing was found for the recipient, Harry Orr, in Hillsdale or in Rock County, Illinois in general.