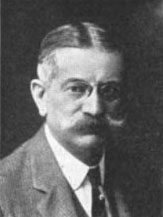 Successful manufacturer of “fancy goods and novelties,” Sigmund Langsdorf, (1846 – 1926) proprietor of S. Langsdorf & Co. The above photo appears in Distinguished Jews of America. See the link for the one-page biography.

Below, the publisher logo for S. Langsdorf & Co., per the prior post for one of their cards. 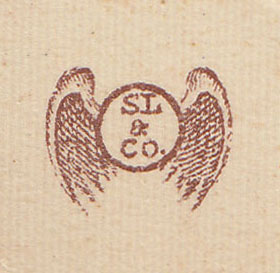 Sigmund Langsdorf, son of Samuel and Johanna (Blumenthal) Langsdorf, was born July 21, 1846 in Battenfeld, Germany, and emigrated to the United States onboard the S.S. Hansa in the spring of 1862. He became a naturalized citizen in 1873, in New York. He married Fannie Lederer in Manhattan, January 27, 1875. City directories for 1875 – ’77 show that he was employed in the wholesale tobacco industry. The 1882 directory has him under the occupational tag of “frames” and the 1884 under “novelties.”

The 1900 Federal Census for Manhattan shows Sigmund, his wife Fanny, born August 1852 in New York, and Sigmund’s brother, Morris, born January 1860 in Germany. Address given as 1125 Madison Ave. Also in the household, Mary Dunn, age 25, born in Ireland. Both Sigmund and Morris’ occupation is listed as “fancy goods manufacturer.”

Below, a short post in the Help Wanted section of The Baltimore Sun, in May 1907:

The following is a portion of an ad run by Lloyd’s Bargain Store on State Street in Chicago – clipped from the Chicago Tribune, December 6, 1908.  Note that among the goods mentioned for sale in the list below are “Post Card Albums, alligatorette covered.” 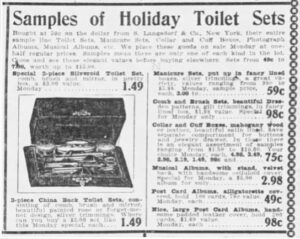 Below, company letterhead from January 1910, showing their address as the corner of Spring and Crosby streets. By at least 1917 (according to the Distinguished Jews of America bio) the business had become one of the largest of its kind, with fifteen to twenty departments, and over 100,000 square footage:

Sigmund passed away in Manhattan on December 20, 1926. His wife, Fannie had predeceased him in 1915.

Alderson, Doug. America’s Alligator:  A Popular History of Our Most Celebrated Reptile. Rowman and Littlefield, 2020. (books.google.com).