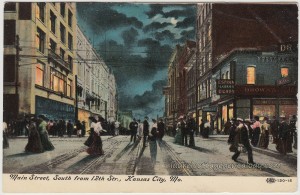 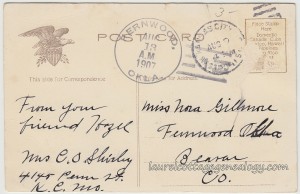 Fernwood, Oklahoma is one of those here today, gone tomorrow locations (of which there were a number of in the OK panhandle.) It shows up in the ghost town category on the Oklahoma GenWeb website, as being located in Texas County, though obviously the postcard sender stated Beaver County. Beaver County takes up the easternmost section of the Oklahoma panhandle and Texas County is the neighboring county to the west. Nora, the addressee of this card, is Nora Gillmore, daughter of Ephram Gillmore and Mary Hunt; born about 1870 in Missouri. She married William James Brooks, May 23, 1909. Their marriage license gave her residence at the time as Hooker, Texas County, OK, and his as Fort Bragg, Mendocino County, CA. Hooker is located about fifteen miles west of the dividing line between Texas and Beaver Counties. Per Ancestry.com family trees Nora was a schoolteacher who formerly resided in Kansas City, MO, which makes sense – the sender of this card was her friend, Hazel, showing a K.C., MO address.

Very few other references regarding Fernwood show up online (as of the date of this post) but it seems to have been recognized as a town or community from at least 1905 – 1908.

State of Oklahoma – Ghost Towns that Begin with the Letter “F”. USGenWeb. Web accessed May 31, 2015. [http://files.usgwarchives.net/ok/okstate/history/fghosttowns.txt] 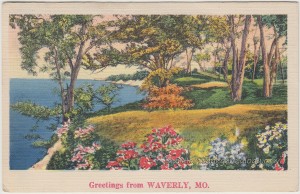 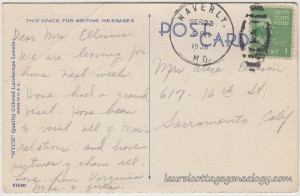 Ensign Kinne was born March 22, 1878, in Housatonic, Massachusetts, died October 20, 1940, in Shields Township, Lake County, Illinois, and was buried October 23, 1940 in Pittsfield, Mass. He was the son of Massachusetts native Finneus Morgan Kinne and Lucretia Bowers. Ensign Kinne’s occupation on this death record is given as Photographer, and residence Waukegan. He was single, and a veteran of WWI.

Ensign Kinne’s early life:  several city directories starting with 1891 for Chicopee and running through 1898 for Westfield, MA show Ensign’s occupation as Clerk, working for his father, P. M. (Phineas M.) Kinne, who ran a billiard parlor on Elm in Westfield (on the 1898 directory) and was advertised as “dealer in temperance drinks, cigars, tobacco, etc.”

The application below for a military headstone shows his Navy enlistment was September 20, 1915 – September 19, 1919. 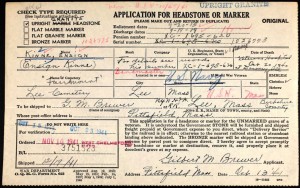 Surprisingly, as far as Meyer & Kinne, Meyer wasn’t located, and the only other reference currently found for the studio was in a compiled military photo list (no photos)  “Circa 1920s…Staff in front of Barracks A, Kinne & Meyer photograph.”  But it’s interesting how these posts at Laurel Cottage often come together – for this one and the prior two – WWI Army, WWII Navy, and a photographer who served in WWI Army and Navy, with the first name of Ensign. How common was this given name? When we hear it today, we probably think military, but in browsing through the census records through the 1880s – 1940s it’s a name that comes up often. 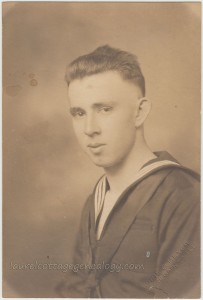 A portrait of a handsome young man in United States Navy uniform, WWII. There is no identifying information on the back, but the photographer’s studio shows the  imprint of Kinne & Meyer, Waukegan, – Illinois.

Kinne was possibly Ensign Kinne, (1878 – 1940). His counterpart, Meyer, is unknown at this time. Waukegan city directories are not showing the studio name, though there was a printer named Meyer who may have gone in with Ensign Kinne or taken over after Kinne’s death. Kinne was himself a veteran (WWI). We’ll look for him further in the next post. 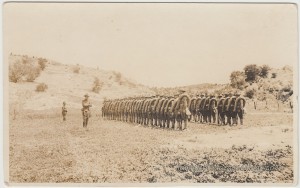 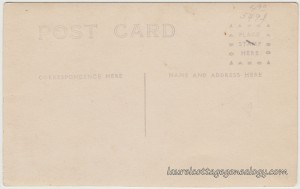 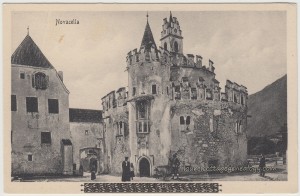 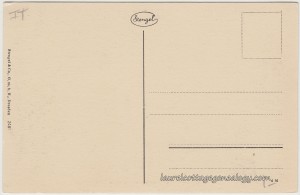 You would not know that there is any printing at the bottom of this postcard (in the banner type design) unless you enlarge it. It shows “Brixen (560m) Kloster Neustift, Engelsburg.” This is a Stengel & Co. card of Novella Abbey or Kloster Neustift. This abbey is located in Northern Italy, near the town of Bressanone, in the Italian Alps. It was founded in 1142 by the Bishop of Brixen, and thriving today, still run by the Augustinian Canons Regular, an order of monks that help care for more than 20 parishes as well as run the abbey, produce award winning wines, etc. Check out the link above. (I want to visit there now.)

As far as a time frame for the postcard, I searched online for the series or number 2481 and found a different postcard, but same number, of almost the exact image on another website, by the same publisher. See 1900 – Brixen, Kloster Neustift Engelsburg. I believe the “1900” refers to the year of the postcard. But check out the differences in the two cards. And this is always interesting – you can see that either one or both of them have been altered from whatever the original photo was (and then we kind of wonder why the publisher would have taken the trouble to make changes.) But notice in the “linked in” postcard that the figure with the staff is not proportionate to the other people. And notice that in the postcard that we have there is a different figure with a staff (a shepherd, well presumably both figures are shepherds) with a goat. In the other image the goat is much smaller, stands next to the two ladies and could easily be mistaken for a dog. And there are other differences, of course, but you get the idea. It’s like one of those exercises for kids (find the things that don’t match) and rather fun! 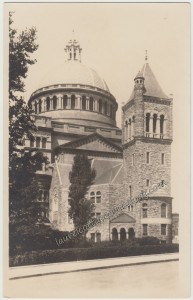 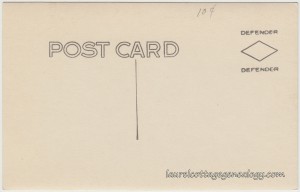 Well! How nice to be wrong when thinking this might have to go to the mystery category. It’s normally quite painstaking to identify (if we get lucky) unknown buildings. But this one was found in Google images of domed churches showing right up at the top. No scrolling, even! The building in the foreground is the original church, but see a full description of both buildings in this Wiki article.

And, of course, this is a Real Photo Postcard, and according to Playle.com, this style of Defender stamp box logo dates from about 1920 – 1945. 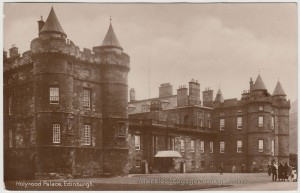 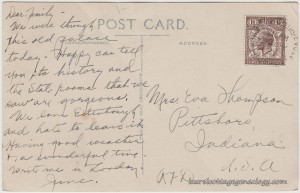 “Dear Family – We were through this old palace today – Happy can tell you its history and the State rooms that we saw are gorgeous. We love Edinbourgh and hate to leave it. Having good weather & a wonderful time. Write me in London. June.”

The year is unreadable on the postal marking which looks like it might indicate 24 July but the stamp is a brown three halfpence Postal Union Congress 1929 stamp. This was one of five special commemorative stamps that were issued on May 10, 1929 by the 9th Postal Union Congress. The PUC was a formal meeting that took place every four years between members of the UPU (Universal Postal Union).

One could easily get led astray here:  There is an Eva Thompson in Guilford Township, Hendricks County, but another Eva Thompson in Center Township, Hendricks County. Most likely the connection is with the second Eva:  Center Township is closer (3 – 4 miles south) to Pittsboro than Guilford Township. And the 1920 Federal Census taken in Center Township shows Nathan J. Thompson, born about 1867, his wife Eva, born about 1867, and their children Milbern, Maurice and June. All are natives of Indiana. So, our postcard sender should be June Thompson, born about 1908, who is likely married to “Happy.” June would be about 22 years old then, when she would have addressed this postcard to her mother.

Looking a little further we discover an October 1929 Laconia passenger list (Liverpool, England to New York, NY) for Milford and June Davidson (spelled Davison.) June’s date of birth on this record is June 3, 1907, and place of birth Danville, Indiana, which is in Center Township. Milford was born in Hanford, California, March 27, 1905. Find A Grave shows a June (Thompson) Davidson. June and Milford were living in Berkeley, California by 1930. Milford’s occupation is chemist. A couple of Peoria, Illinois city directories (1955 – 1956) list Milford and June, with Milford as chief chemist for Pabst Brewery. 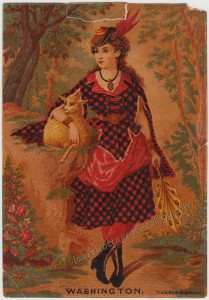 A beautiful red-haired lassie in Rob Roy MacGregor-Black (?) plaid skirt and jacket, and a tam-o-shanter with red wings, holds a peacock feather-designed fan. She is posed standing on a path in the forest, with her arm draped protectively around a lamb, who rests just next to her on a grassy ledge. Girl and lamb are looking off to their right. The design ends up to be a little comical – it appears that the lamb wears a little pointed hat (!) but really that is just the bonny lassie’s arm showing through her sleeve – her long sleeves being slit almost up to the shoulder. Very stylish!

At the bottom of this Victorian Era trade card is the wording:   “Washington.“ And then in smaller print, “Trade Mark Registered.”  What is meant by Washington? Our best guess is that it’s one of a series of cards for each state in the Union. Washington became as state November 11, 1889. 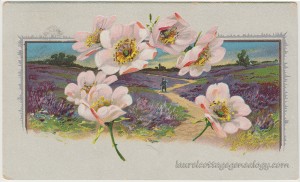 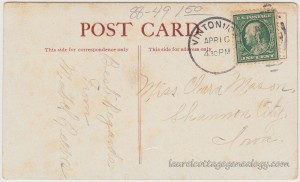