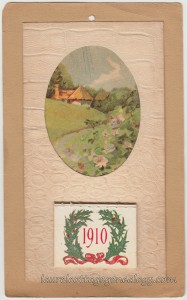 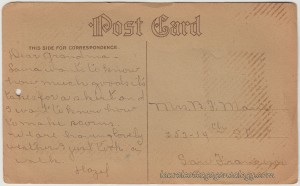 This one (from the Ethel Main Collection) may seem a little out of place:  It would normally go up in December, per the little calendar at the bottom (with Christmas wreath?) but then again the lovely oval image above it shows a summery, old roses and cottage scene, so that fits in with our present month of June. The calendar turns page by page and is not missing any months. We picture this postcard hanging on someone’s wall 105 years ago, though perhaps it was saved in a desk drawer or scrap book, instead. After all, it would seem very tempting to tear away each month as it went by.

“Dear Grandma – Laura wants to know how much goods it takes for a skirt and I want to know how to make scones[?] We are having lovely weather. I just took a walk. Hazel.”

(This branch of the Main family, as found in the collection, will be sorted out a little later, when we can take plenty of time to work on how everyone fits together.) 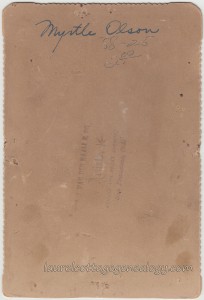 Here’s a Cabinet Card of adorable Myrtle Olson, about seven or eight years old, posed for the photo wearing a plaid dress with long sleeves which are puffed from elbow to shoulder, a white collar and button-top boots.

Myrtle appears to be the daughter of Andrew P. Olson and Lina (Mayrisch) Olson, and is on the 1900 Federal Census, for San Francisco, with her mother (widowed) and older siblings, Bertha, Andrew and Emily.

The studio address on the back shows 17 1/2 Treat Ave, the name being a little hard to read there; the first guess at it was …?…J. Van der Kaali [?] & Co. But luckily the photographer was found in the 1897 San Francisco city directory with a residence address of 17 Treat Ave, and with name clarified as William Vanderkay. Further verification (with middle initial and double “a” in Kaay, matching the stamp on the card) appears in the 1901 city directory for William J. van der Kaay, showing an address of 629 Union. Both directories list his occupation as photographer. 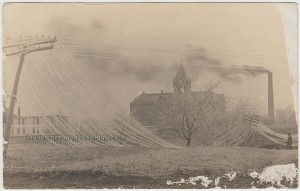 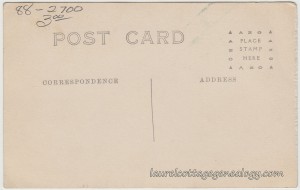 This Real Photo Postcard dates from about 1907 – 1918, due to the divided back and the style of AZO stamp box with all four triangles pointing upward. The location is unknown, presumably somewhere in the United States, and somewhere that was recovering from the effects of an ice storm, or a heavy snow that melted, with freezing temps on top of that. If you enlarge the photo you can see the icicles on the lines. It looks like the ground had become too soggy to support the poles which in turn couldn’t support the extra weight. There is a major clue for location in this photo – if you look at the pole on the left you’ll see the street sign attached which says “H St.” Shucks! Too bad we can’t read the cross street – too much of an angle. The building in the background is pretty distinctive, though, and the fact that this building’s neighbor was a power plant of some kind, with smoke stack operating here. These clues should be very helpful if anyone wants to browse historical newspaper articles re storms, search for towns that have or had an H Street, and search historical photos trying to match this building. (I had to stop after awhile.) Or maybe someone will just recognize the building. Note also the man on the right, surveying the damage. What a great photo, all in all! And the image of the ice on the bare trees and on the wires is lovely.

Divided back, Real Photo Postcard. AZO stamp box. Circa 1907 – 1918. Damage to right and lower right had removed part of the photo. 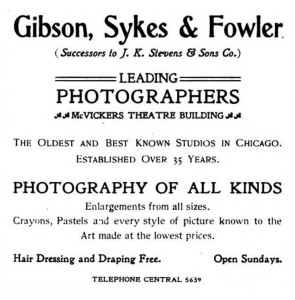 Countless mentions of this prominent Chicago photography studio can be found online; appearing in the business directory as early as 1905 (55 McVickers Bldg.) and mentioned in the society page of the Tribune as the photographers for an engagement photo in 1926. This time frame is just a general estimate for them, and curiously, census records during this time reveal little, if anything. But we do know that Gibson was David E. Gibson; Sykes was Melvin H. Sykes; and Fowler was A. E. Fowler. Melvin Sykes also appears to have operated on his own; records were found for him from 1905 through 1923; and appearing as Melvin H. Sykes, Inc. in 1923.

1906 – Mentioned in thanks for supplying some of the photos of orphaned babies that were advertised in Good Housekeeping. The children were waiting to be adopted. (Wow, how times have changed!)

Below, an example of a 1917 engagement photo done by Gibson, Sykes & Fowler, that appeared in the Chicago Daily Tribune, 28 October, 1917:  Miss Myrtle Mitchell, of Negaunee, Michigan, daughter of Mrs. Samuel Mitchell. Myrtle was noted for “her charm and cleverness.” 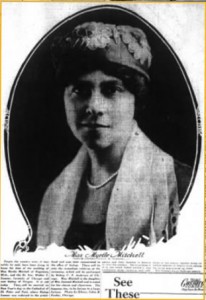 1921 – Associated Portrait Photographers held their November meeting at the Gibson, Sykes & Fowler studio. There were over eighty members that attended.

Here’s another calling card, but there are too many possibilities for this common Swedish name, even with the middle initial included, to try to narrow them down to who this card may have belonged to. The writing on the back (by Gustaf?) is a translation to Swedish of the lovely message that the rosy-cheeked girl displays.

“Across your path may sunbeams play!” 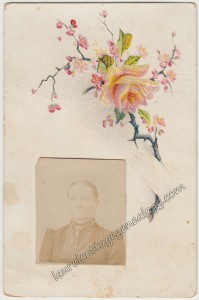 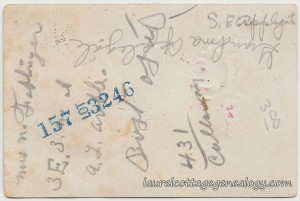 This calling card (for lack of a better term) with lovely rose design, has an attached (faded) photo of a woman. The flip side has some other writing on it, besides the identification of  “S. E. Applegate”  and  “Grandma Applegate.”  A name with address appears to be “Mrs. N. Fablinger, 3 E. 3rd St.” [?]  and below that it looks like  “A. L. Arble”  (or short for Arbunkle?) or perhaps it’s reading as,  “A. L. Auble.”  Then we have some more scribbling, from the photographer, we presume,  “Bust as is”  (or Best as is?) and, based on some research, a possible train time schedule, showing,  “431”  and  “Callaway.”

The most likely candidate…

S. E. Applegate is a name that comes up in census records in various places around the United States. However, after a bit of research, the most likely candidate to fit this photo, is Mrs. Sarah E. Applegate, born Pennsylvania, January 1855. The 1900 Federal Census for Dorp Precinct (Gandy vicinity), Logan County, Nebraska reveals:  John Applegate, born Indiana, January 1839, wife Sarah E., born Pennsylvania, January 1855 and daughter Dalorus (Dolores) born Nebraska December 1881. The 1900 for Gandy lists Nicholas Fablinger, wife Lizzie and daughters, Margaret and Lizzie. And Abraham Auble (Abraham Lincoln Auble per additional records), shows up living in Garfield Precinct, Lincoln County, (southeast of Gandy, a short distance.) The name Callaway (originally thought to be the photographer’s name) shows up as a place name. The town of Callaway is located in Custer County, about 40 miles southeast of Gandy:  hence the thought that the 431 could have a been a quick note jotted down by the photographer re catching the train to meet his appointments. Just doing some quick browsing of historical newspapers, it appears there was a proposed Union Pacific Callaway-Gandy extension, though there was a line running from Kearney to Callaway in year 1900. “Detouring” a little to the subject of the town of Gandy and the proposed line we find an interesting June 1914 article in the Lincoln Star. (Click to enlarge.)

Per an Ancestry.com family tree, Sarah was Sarah Elizabeth Clark, born January 25, 1855. She married John Burge Applegate December 21, 1873 in Lisbon, Iowa, and died May 10, 1909 in Gandy. The 1880 census shows John B. Applegate, wife Sarah, and children, Elizabeth, Cyrus and Frank, living in Precinct 7, Custer County, Nebraska. As previously mentioned, linking the photo to this Sarah is our best guess. Gandy, NE and vicinity seems to be the only area that shows all the names mentioned on the back of the card, though the “3 E. 3rd Ave[?]” is a bit of mystery – if that is what it says, it could be for nearby Arnold, NE.