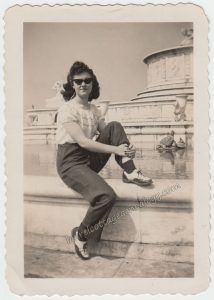 Another found on the recent Detroit trip. Beautiful Bernice, posing at the Scott Fountain on Belle Isle. The cat-eye sunglasses trend was popular in the 1950’s. Her shoes now, hmmmm, two-tone, but not really a saddle shoe – this exact style wasn’t found online. As to the inscription on the back,  “ ‘Your truly’ Bernice or Dagmar”  that’s one of the most interesting aspects of this photo.

A character name from a play?

And at first, I thought it was “Dogmar” and was searching for Dogmar as a possible surname or given name, and not coming up with much…..Then, and this happens to me quite a bit, for which I am truly grateful:  A day or two later I came across the movie I Remember Mama (1948) playing on the classic movie channel, with Irene Dunn as the Norwegian-born mother of four, set in San Francisco at the turn of the 20th century, with the youngest daughter named Dagmar (wait, what?). If you’ve never seen the movie, check it out (so beautiful!) The film is based on the story, Mama’s Bank Account (1943) by Kathryn Forbes, which inspired a play (1944) then the movie, then t.v. series Mama (1949 – 1957) and later two musical versions in the ’70s. The movie’s story is told from the standpoint of the oldest daughter, Katrin, an aspiring writer, played by Barbara Bel Geddes (Dallas fans, you will remember her as Jock’s wife, Miss Ellie.) So, did Bernice in our photo above play Dagmar in a school play production? It’s our best guess, other than the fact that Dagmar could be a middle name for her or vice versa (Dagmar Bernice). 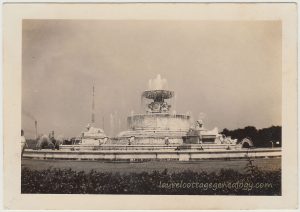 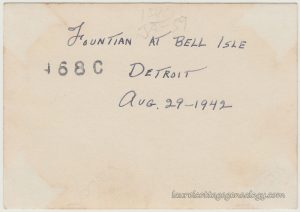 Since we were in Detroit (Hamtramck to be exact) for the last post, here’s a snapshot from 1942 of the James Scott Memorial Fountain. (Wonder if the guy who picked up his car at the factory stopped off to visit Belle Isle?) This thought conjured up the image of a scattering of hundreds of thousands of photos taken since the fountain’s completion in 1925, some that didn’t survive, but many resting in old photo albums and shoe boxes, and tons now in digital format (professional shots, wedding photos, group shots, selfies, etc.). Our photo above had made it out to San Francisco and was snatched up at the paper fair; a pocket-size repository of great memories of times spent on Belle Isle and the magnetic pull of a mini water-and-marble paradise.

Let’s go see the fountain! All fountains have an enchanting quality, don’t they? There’s the beneficial negative ions from the water’s spray, and if built into the design, the sheer beauty and whimsy and magic of characters so often depicted in fountain architecture, like the Scott’s turtles with their attendant frogs, it’s guardian lions with expressions so sweet you want to hug them (the lions, not their expressions, oh well, both), it’s winged beasties with ram-like horns, it’s devilish-looking water spirits riding happy fish….Surely too, we’re soaking up magic from the form of the fulfilled dream and hard work of the architects and sculptors, (in this case Cass Gilbert and Herbert Adams) the often-haggling city council members, (the Scott’s creation being controversial due to it’s namesake’s reputation; there’s the statue of the man himself overlooking the whole scene) the general laborers (of course) in the construction; and then the magic reinforced by all of us:  the residents and visitors that have and will come to a fountain to cool off, dream, celebrate, recharge, marvel and leave inspired.