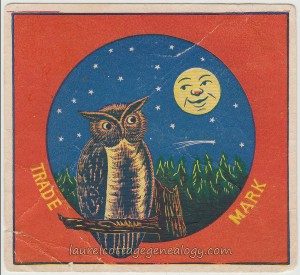 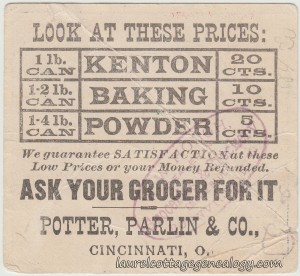 The trademarked design on this Kenton Baking Powder trade card seems to fit the fall season with the weather having turned chilly. Notice the red-tipped nose on the man in the moon. And we hope the owl has seen the shooting star and made a wish! 😉

The oval stamp on the back of this one says:   “W. W. Hough, Dealer In Groceries & Crockery. Empire Block, Boonville, N. Y.”

According to online city directories, Hough was a grocer in Boonville at least as early as 1878 and up until at least 1884. However, he more likely operated until about 1904, according to the ad below for H. B. Belknap, successor to W. W. Hough, from the Boonville Herald, dated January 26, 1905. 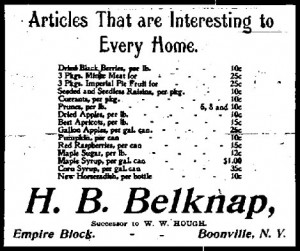 As an aside….the politics of city directories 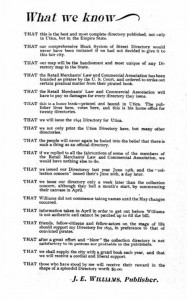 The above page is from Williams’ Utica City Directory and Williams’ Street and Block Directory, 1894 – including Boonville and other towns. Check out the  “convicted pirates”  reference. In general city directories contain wonderful information for researchers and historians, and this particular directory was a great one, with items such as a breakdown of the total length of paved (27.09 miles) and unpaved (74.05 miles) streets in Utica in 1894;  a historical listing of appointed and elected mayors year by year; a list of fire alarm signal boxes (of which there were many) and their locations; a table of wages; and an official death register (the first we’ve come across in city directories) for those over age eighteen and excluding state hospital deaths. In short, $5.00, the price for this particular directory, bought you a lot! 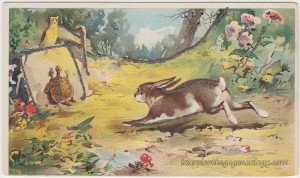 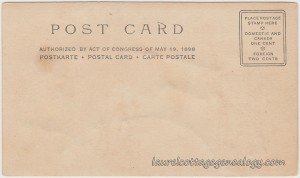 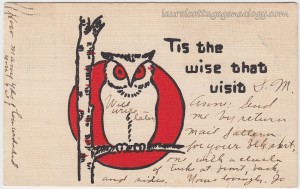 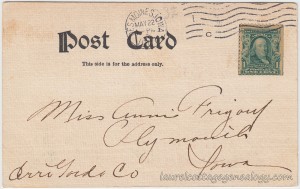 Owl on tree branch with red moon in the background, with the caption  “Tis the wise that visit.”

The sender wrote:  “S.M. Anne:  Send me by return mail pattern for your blk skrt; one with a cluster of tucks at front, back, and sides. Yours lovingly, Jo.”  Inside the owl drawing Jo wrote,  “Will write – later”  and on the side,  “How many yards / how wide did you get?”

Anna married John Bliem on August 30, 1915 in Mason City, Iowa. The marriage record shows Anna as born about 1884 in Plymouth, Iowa and that her parents are Joseph Friyouf and Barbara Mar…k? (original image not available from online source.) John Bliem was born in New York City, age at time of marriage about 49, and his parents are John Bliem and Clara Claus.

The 1940 census, which shows Anna as head of household and includes her sisters, is very interesting in that it states Anna’s occupation is Postmaster.  National Archives (NARA) records shows she was nominated for the post on April 23, 1934, was confirmed on May 7th, and that she retired on December 31, 1949. You might be surprised (as I was) to learn that it was not uncommon for women to be appointed as Postmaster (this is the official title, though some say Postmistress.) There were women postmasters before the Revolutionary War when the country was still under British rule, and in fact (without going into much researching and comparison) on May 5, 2008, in the United States, there were more women than men holding the position. The NARA website indicates also that it was common in rural areas for women to be appointed.

As far as Jo, the sender of the postcard, it’s possible she was a relative. There is a Josephine Friyouf showing up in city directories in Des Moines. Regarding the publisher, this info is not given but similar postcards found online show a copyright mark for R. L. Wells.