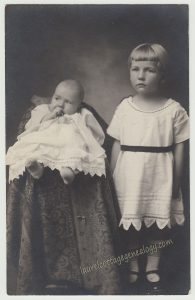 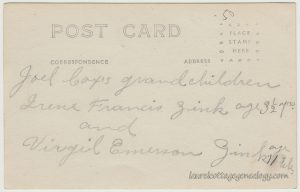 Continuing on with a kid theme before we get to some Christmas posts…..Here’s one very nicely identified as:

Per the Find A Grave entries Irene was born May 4, 1919 and Virgil March 31, 1922. Both are natives of Kansas. Parents are Virgil E. Zink and Lena M. Cox. The ages given on the back of the postcard appear to be a little off, according to their birth dates, but this photo must have been taken in 1922. And if you enlarge the image (I was admiring Irene’s dress and the crochet work for both dresses) you’ll notice that Virgil’s eyes were “enhanced” a little. This was done by the photographer at some point during the photo processing. 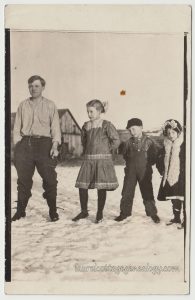 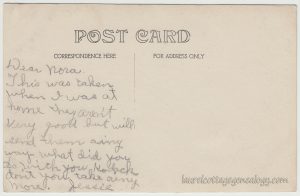 Edward Payson Butler was born in Clinton, Pennsylvania May 13, 1834, son of Hezekiah Goodwin Butler and Emily White, according to the 1879 genealogy compilation of Benjamin Cleveland and family. All seven U. S. Federal Census records, as well as one of two online California voter records indicate the year of birth as 1834, with the 1900 census showing the month as May. The 1850 census, taken in Dyberry, Wayne Co., Connecticut, shows Edward P. Butler, age 16, with parents Hezekiah Butler, born about 1800 in Connecticut and Amelia W., (Emily) born about 1801, also in CT (the middle initial W possibly standing for her maiden name of White) and sister, Mary E. Butler, born PA about 1836. This census shows the father’s occupation as Shoemaker.

According to the above-mentioned Cleveland Family genealogy compilation, Edward was married to Mary Jane Harvey in 1856 and they had two children, Ira G. and Edward P., who sadly died very young:

The marriage year of 1856 listed above is ten years off from what is stated on the 1900 census. If the 1856 date is correct, then the year could either have been mistakenly given or mistakenly recorded at the time of the census. However, there is further information in an online source for a marriage of E. P. Butler and Mary J. Harvey, May 13, 1885; both are listed as Reno residents. So, it would seem that Edward and Mary Jane divorced and later re-married. Mary Jane does not appear on any of the census records, and must have died after the 1900 census, but before the 1910.

As to Edward’s professional life, much as already been recorded, and can be found in the book entitled Pioneer Photographers of the Far West: A Biographical Dictionary, 1840 – 1865, by Peter E. Palmquist and Thomas R. Kailbourn. This same info plus additional detailed information can be found in an MAH (Museum of Art and History, Santa Cruz) blog posted by Stanley D. Stevens, dated May 12, 2007. The following is a professional timeline for Edward P. Butler, gleaned mostly from the research of the above authors but with a little new information added in here, regarding San Rafael, the date Edward was in Reno, and the mysterious “Paige” partner:

Searches for the photographer listed as Butler’s partner in August of 1864, and known only as Paige, come up empty. However, there appear to be likely two possibilities under Gaige. Authors Palmquist and Kailbourn, referenced above, list entries for A. G. Gaige, George A. Gaige, and J. G. Gaige, all active in Arizona and New Mexico. It’s likely that of these three Gaiges, two of them are the same person. It is very common in census records, for instance, for the first and middle initials to be reversed, and people often went by their middle names. And there is the additional possibility that J. G. Gaige was incorrectly heard and reported as A. G. Gaige. Author Jeremy Rowe (Photographers in Arizona 1850-1920, A History & Directory) cites photographer J. C. Gaige, who was active in New Mexico and Arizona, but this person would be the same as J. G. Gaige (both Rowe and Palmquist and Kailbourn state he died at Camp Goodwin, AZ  July, 1869.) Rowe lists photographer Francis A. Cook in the paragraph just prior to his J. C. Gaige reference, Cook being well-documented in early Arizona photography, and a known partner to Butler per the 1880 Federal Census taken in San Rafael, CA.  So, not finding any references to Paige, knowing that typos occurred in newspapers, and with the fact that many of these photographers, as we can see, moved around quite a bit, sometimes working as “traveling photographers,” therefor having occasion to know each other first-hand or at least to have known of each other, it’s possible then that Edward Payson Butler partnered with either of the Gaige photographers for a very short time.

Edward Payson Butler died in 1923, age about 89. A photo of his gravestone can be found online at Findagrave. He was buried in the I.O.O.F. Cemetery, Saratoga, Santa Clara County, CA.