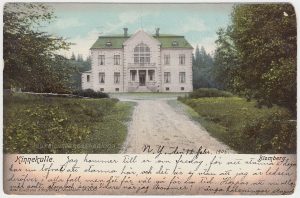 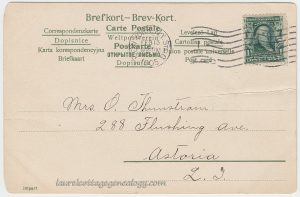 The adverb deröfver, according to Wiktionary, is an obsolete spelling of däröver. Below, a translation from online sources. We’ll try to get a better one, shortly:

“I’m coming to you on Friday, to stay 10 days now have now promised to stay here, and it’s not without I’m sorry for anyway, but it may be a while. Hope you are all good, big and small. More when I arrive! Many greetings, August.”

From the above link, Blomberg Manor is beautifully described as being located  “…on the flowering mountain Kinnekulle on Lake Vänern.”  (Google translation coming up very poetic – no doubt from the Swedish!) The first-known original proprietor was from the early Middle Ages, an Olof Skötkonung of Blomberg. As to be imagined, since then the estate has passed through a variety of hands (bishop, priest, statesmen, noblemen, captain) and uses (dairy, lime mortar, grinding mill, sawmill, distillery). Today it is proudly owned by the Jönsson Family, and is an  “ecologically driven farm in regards to agriculture and meat production”  per quick web translations. 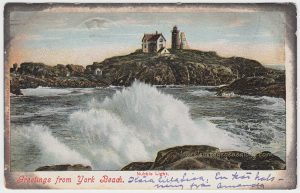 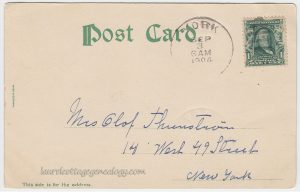 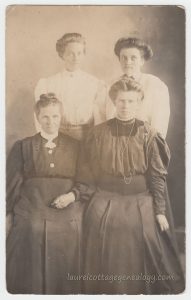 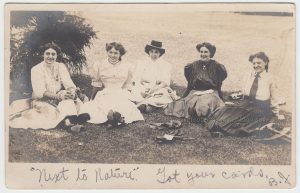 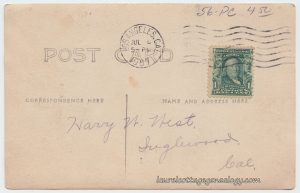 Had this card not already have been captioned (love it, thank you!) by the sender, I think I would have given it the title:  “What We Were Wearing In 1907”  as it seems a nice example of some varying styles in women’s fashion. And aren’t they beautiful…these five friends posing and smiling for the camera, seated on a stretch of lawn, on a sunny July day.

Addressee, Harry W. West is most likely the person named as such on the 1910 Federal Census for Pasadena, born Iowa about 1887, of Swedish-born parents, occupation driver with an ice company; spouse Freda L. West, born Sweden, about 1887. From an Ancestry.com family tree, Freda’s maiden name is stated as Lundgren. Below, a crop from the 1909 Pasadena city directory, showing Harry West, employee of the Pasadena Ice Co., residence 988 Glen Ave. 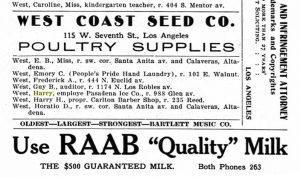 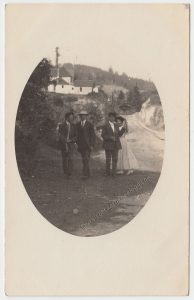 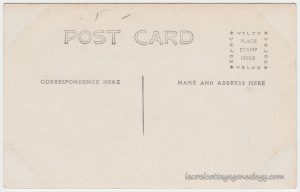 The who and where are unknown in this RPPC (for some reason I keep thinking Oregon) of three young men and a young woman, dressed up for the evening, heading up the dirt road to….a country dance, we think. The young lady carries a parasol, and per the norm for the time-period, all four are wearing hats. That’s a wide hat band ribbon around the fellow’s hat, second from left:  You can just barely discern the crown that’s blending in with the background. 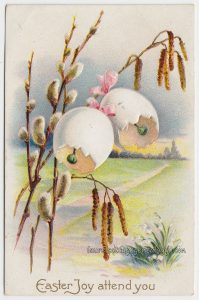 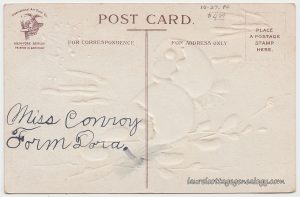 The spring colors are beautiful in this card, and the theme is egg shell bells and pussy willows, with a narrow road stretching off into the distance…On the back is written,  “Miss Conroy Form Dora.”  Heehee, “from” is charmingly misspelled. This looks like it might have been a card from child to teacher. 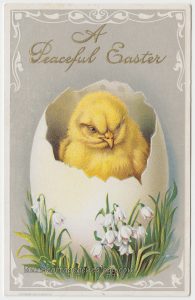 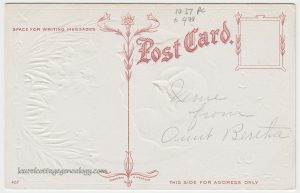 Who was H. Wessler? At the time of this post, no identifying records were found for him. He’s mentioned in a Google book snippet along with John Wensch (see prior post), as both being importers and producers of beautiful greeting and postcards. We presume that Wessler, like Wensch, was of German ancestry. Quite a number of postcards can be found online for him, but none showing the full name. This is the second H. Wessler we have on LCG:  See Just A Few Lines From.

“Every flower to a bird has confided

The joy of its blossoming birth,

The wonder of its resurrection

From its grave in the frozen earth.”

This is an excerpt from the fourteen-stanza poem “Nature’s Easter Music” by American poet and author, Lucy Larcom (1824 – 1893). 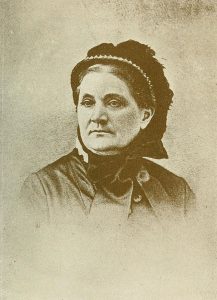 Ms. Larcom is known especially for her autobiographical, A New England Girlhood, and for having gone to work in the cotton mills for about ten years, starting at age eleven…She was a very popular and prolific writer. The Poetical Works of Lucy Larcom is available as a Google eBook. (Personally, I must admit I had never heard of Ms. Larcom till this post, but am now a fan. The line, “Who has tracked a dream’s beginning?”  from “The Magic Flower” has captured my imagination.)

Publisher and New York native, John Winsch (1865 – 1923) is well-known to ephemera collectors, especially for his Halloween postcards – antique and vintage Halloween anything is much sought-after today. The 1910 Federal Census for Richmond, NY shows his wife, Florence, born in Pennsylvania, about 1871, and their son, Frederick, born New York about 1905. 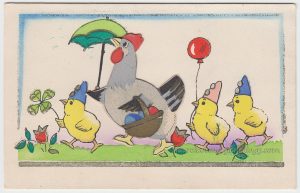 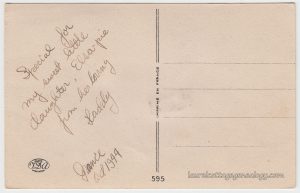 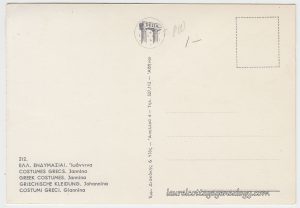 Just something to go with the prior post, for Greece….specifically regarding the traditional dress of Ίωάννινα or Ioannina in English, though the photo was actually taken near Acropolis at Athens. See the comment on this post from Maria.