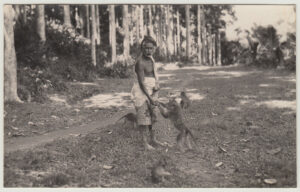 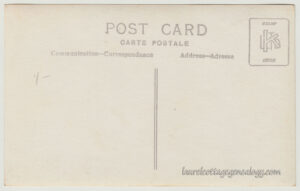 Jumping from Bali over to India, (at least, we presume this to be India), here’s a lovely, Real Photo Postcard of a man in a traditional style dress (the patterned portion is a lungi, I think) and cloth head covering. He likely has some fruit in his hand that the monkey is trying to get. You’ll see four monkeys in this image, probably all some type of macaque. The card is dated by virtue of the K Ltd type of stamp box. 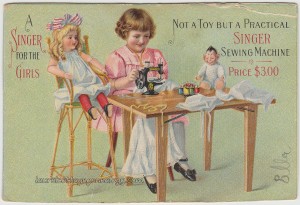 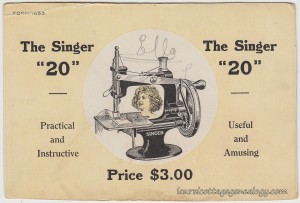 True, this trade card is not in the best of shape, with some major creasing at the top right, and the name Ella written in childlike handwriting on the front and back (Ella Ellison.) But as of the date of this posting, there do not appear to be any others showing online (though Pinterest shows an ad of the same design that contains some added wording and appears in brighter colors.) Anyway, the front shows a charming illustration of a little girl in pink, seated at a small wooden table, sewing on the Singer 20. Her dolly in high chair is keeping her company, as well as her toy monkey (looking rather politically incorrect) who is seated on the table. The front of the card reads: