If ever a guy was game (just a happy coincidence with the pun) to try new things, it seems that Sam W. Kirvan, was one such guy. S. W. Kirvan, the publisher of the Old American Locks postcard in our prior post, was also at various times, a pilot, fishing guide, fish and game warden, vaudeville theater partner, store and restaurant owner. Not surprisingly then, but luckily, as we can see from the ad below, he was also a very good self-promoter. (In the world of antique postcards it’s uncommon to find a likeness of the actual publisher.) 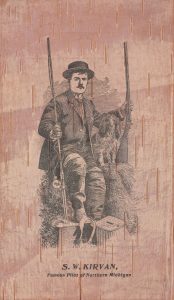 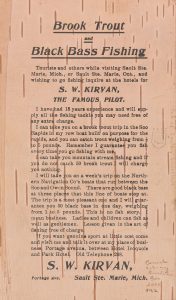 Samuel W. Kirvan was born in Ontario, Canada, November 15, 1862, and died December 26, 1937. He was the son of Irish immigrants, Martin and Ellen Jane Kirvan. The 1871 Federal Census shows Samuel at about age 6, with his family in Arran Township, Bruce County, Ontario. On October 3, 1886 he married Margaret Ann Harper, in Cheboygan, MI. It’s not clear how long he may have published postcards. The 1893 date comes from a snippet book result that shows up on another site with a later estimated date for the same four-page publication, and the American Locks postcard is 1906, though there may have been later ones. There don’t seem to be too many of S. W. Kirvan’s postal cards that survived. In any case, his name can be found numerous times in the Sault Ste. Marie Evening News, as well as in census records and city directories. The following is an occupational timeline with rough date estimates:

1892 – Fruit and confectionery store bought from T. A. Campbell

Some clippings below from the Sault Ste. Marie Evening News…. 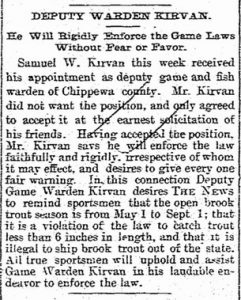 A clip from a December 20, 1905 article, with Samuel Kirvan later in the article making the distinction that,  “We will allow nothing that parents cannot conscientiously take their children to witness.”

United Cigar Store ad, December 16, 1922. The cigar store is mentioned in a later article as being a cigar store/pool hall. 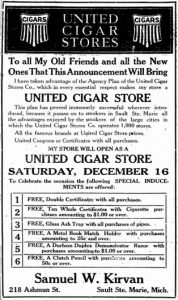 According to the excellent website Güstrow for historical photos and postcards and a Wiki entry in German, this publishing company was originally started by Julius Goldiner (1852 – 1914) who began publishing postcards in about 1895. After his death, his wife, Auguste (Bock) Goldiner (1856 – 1941) and daughter Elisabeth Goldiner (1879 – 1945) continued the company under the name of Kunstverlag J. Goldiner, and made it one of the great German postcard publishers. Kunstverlag translates as “art publisher.” After Elisabeth died the company ran as a family business under Charlotte (Goldiner) Kröger, Erna (Kröger) Quiring and Lore Kröger until 1977.

We have one postcard at this time from this publisher. See the post entitled Gruss Aus Berlin.