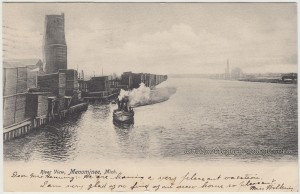 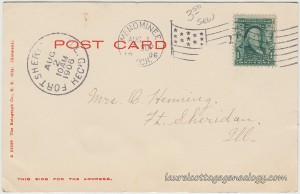 “Dear Mrs. Henning: – We are having a very pleasant vacation. I am very glad you find your new home so pleasant. Miss Wilkins[?]”   Addressed to:

The city of Menominee is located at the southernmost tip of the Upper Peninsula, on the shores of Green Bay of Lake Michigan, and the banks of the Menominee River, which makes up part of the Michigan-Wisconsin border. This postcard is the last one in the Dr. Oswald Henning Collection, but we hope to come across more.

Undivided back, used postcard. Postmarked from Menominee, Michigan on August 1, 1906. Incoming postmark at Fort Sheridan, Illinois on August 2, 1906. Publisher:  The Rotograph Co., New York City, NY. Series or number:  A52588. Made in Germany. 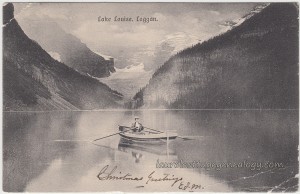 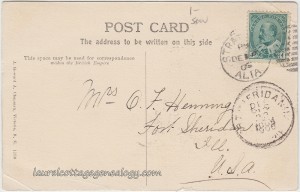 These Mr. and Mrs. O. F. Henning postcards have a real knack for finding me! I keep discovering that I have more of these. I believe they may have all been in the same postcard dealer’s collection, but in that collection there are thousands of cards. After the cards are bought, the seller organizes them all into state or country categories, or themes, like holiday or teddy bears, or what have you, so for that reason the cards from the same family tend to get separated (akkkk!)  So, it’s remarkable that I seem to keep picking out the ones that happen to be addressed to this couple. This one of Lake Louise will be the sixth in our “Dr. Oswald Henning Collection.” And the reason I chose it is because I have a fondness for Lake Louise, though I’ve never been there; and also because you don’t see as many older Lake Louise cards.

Anyway, this is addressed to Mrs. O.F. Henning (Helen Muirhead) at Fort Sheridan, Illinois, and shows a woman in a rowboat out on the lake. The sender wrote,  “Christmas Greetings”  and signed it,  “E.J.M.”  It looks like the type that would have been produced from a photograph, as it seems these normally don’t come out with an extreme amount of clarity, but it’s still lovely.

A Wikipedia entry describes Laggan as the former name of the hamlet of Lake Louise. Lake Louise was named after Princess Louise Caroline Alberta (1848 – 1939.) She was the fourth daughter of Queen Victoria and the wife of John Campbell, who was the 9th Duke of Argyll, and who served as Governor General of Canada from 1878 – 1883. If you didn’t already know, you probably correctly guessed, that the province of Alberta was also named after Princess Louise. Laggan, built in 1890, was a station along the Canadian Pacific Railway route.

The card is postmarked from Alberta in December 1908, the outgoing date being difficult to read. But the incoming date to Fort Sheridan, Illinois reads December 22.

Last but not least, we happen to have a beautiful trade card showing a drawing (or some type of print) of Princess Louise. This was the first posting here at Laurel Cottage Genealogy and definitely one of my favorites. It’s just gorgeous. 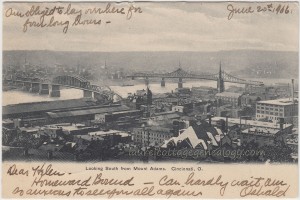 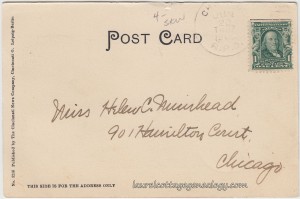 A view of Cincinnati, Ohio, looking south from Mount Adams, circa 1906:  This is the fifth postcard we’ve found for the Dr. Oswald Henning Collection. (See prior posts for more information.) They were all in the same dealer’s collection for sale at an antique and vintage paper fair in California. However, they were not all together, and at the time they were purchased, the relationship between Oswald Henning and Helen Muirhead was unknown. So, it’s really unusual and interesting that they were chosen that day out of thousands in the dealer’s collection. Helen and Oswald were married on June 30, 1906, in Chicago. See the first in this series, entitled The Lake, Belle Isle Park, Detroit, Michigan for more information. As you can see, this card was postmarked only ten days before the couple got married! The card was addressed to:  “Miss Helen Muirhead, 901 Hamilton Court, Chicago.”  Oswald dated the card on the top right and he wrote:

“Dear Helen – Homeward Bound – Can hardly wait am so anxious to see you all again. Oswald”  and at top left he added,  “Am obliged to lay over here for four long hours.”

The bridge on our left appears to be the L&N (Louisville & Nashville) Railroad Bridge, which was first opened under the name of the Newport & Cincinnati Bridge, on April 1, 1872. The name changed to the L&N in 1904. The bridge was rehabilitated (and painted purple) and in 2003 re-opened for pedestrians only under the name of the Newport Southbank Bridge but is commonly called “The Purple People Bridge.”

The bridge on our right appears to be the Central Bridge (Cincinnati Newport Bridge) which opened in 1890 and was demolished in 1992. In it’s place today is the Taylor Southgate Bridge. Don’t let the church steeples in the photo fool you when you look at the Central:  They almost line up with the bridge’s two highest points. 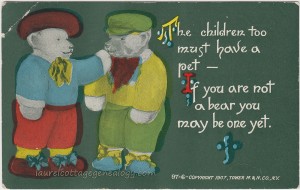 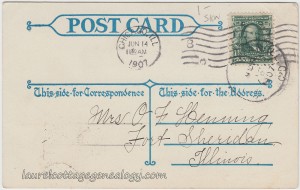 must have a pet –

If you are not

Here’s another postcard in the Dr. Oswald F. Henning collection, showing an artist’s rendering of two absolutely adorable bears, dressed in clothing with ties and hats. The one has his arm on the other one’s shoulder and is confiding the above verse. There is no message or signature from the sender, and the card is addressed to:  “Mrs. O.F. Henning, Fort Sheridan, Illinois.” 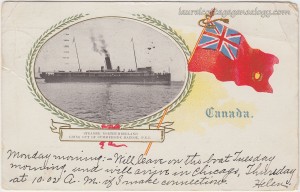 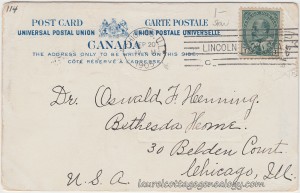 Here’s the third postcard in the Dr. Oswald Henning Collection. We may come across more, you never know! The caption for this one is:   Steamer Northumberland Going Out Of Summerside Harbor, P.E.I.”  and shows an old photo of S.S. Northumberland, in an oval setting bordered with laurel leaves, and ribbon and with what appears to be a simplified drawing or painting for the Canadian flag at that time.

According to an article in the blog Sailstrait, the 2,500 horsepower steamer was the  “pride of the fleet”  for the Charlottetown Steam Navigation Company; was built in Great Britain at Newcastle-upon-Tyne in 1891; and for two and a half decades ran between Charlottetown and Pictou, and Summerside and Pointe du Chene.  (See first source below for a more detailed description.) The vessel was later moved to Lake Ontario for the Port Dalhousie to Toronto service and refitted as an excursion steamer. She operated till she was (sadly) destroyed by fire in 1949.  The following photo (now in the public domain) is from about 1940, and was found on the website Maritime History of the Great Lakes, and shows S.S. Northumberland as she enters Port Dalhousie. 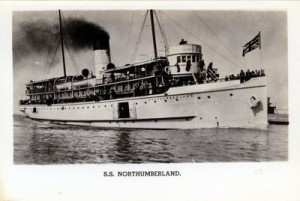 However, since this postcard is from 1905, the sender would have boarded S.S. Northumberland as she first appeared in the top image. Our 1905 traveler wrote,  “Monday morning: – Will leave on the boat Tuesday morning. and will arrive in Chicago, Thursday at 10:02 a.m. if I make connections.   Helen.”

Per the prior post, Dr. Oswald Henning, along with brother Otto, was on the board of directors for Bethesda Home which was initially a training facility for nurses, and afterward a home for the elderly. His father, Frank Henning was president of the Home. 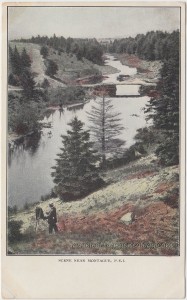 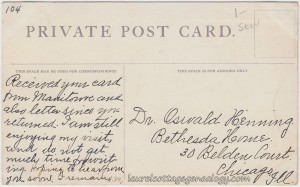 A scene near Montague, Prince Edward Island, Canada. This appears to be a hand colored image that was produced from a photograph. Perhaps there are some experts out there who can tell whether the man in the photo was a photographer or an artist.

This and the postcard coming up next were incredible finds because of their timeliness: They were just this past weekend picked up at a vintage paper show. They may have been found in the same dealer’s collection that the first Dr. Oswald Henning postcard was found in, (just two posts ago.) That purchase would have been made earlier this year, I think. But out of the thousands of postcards in the dealer’s collection this past weekend, of which I only looked through about a quarter, I happened to find these. The odds are incredible that the second and third Oswald Henning postcards would be found right after I happened to put up the first. The sender’s name here is Helen, and she writes:

“Received your card from [?] and also letter since you returned. I am still enjoying my visit, and do not get much time for writing. Hoping to hear from you soon. I remain, H.M.”

The above address was for Bethesda Home For the Aged, which was originally a training school for nurses. The link below is for a January 6, 1908 newspaper article that appeared in The Inter Ocean. The article describes the dire financial situation of the Home and quotes Oswald Hennings’ father, Frank Henning, as well as a couple of the “inmates.” Frank Henning was president of Bethesda Home and his two sons, Oswald and Otto were on the board of directors. http://www.newspapers.com/clip/1026308//

Divided back, Canadian unused postcard with writing. Publisher unknown. Circa 1906. 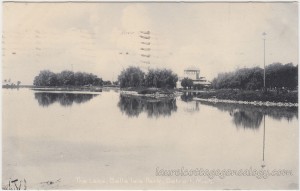 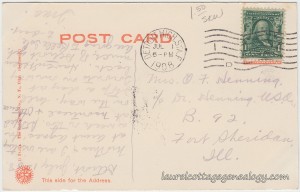 Here’s another Belle Isle postcard – the second of two on this site, so far. The sender wrote:

“Detroit, July 1 ’08. Mother & I are visiting at Aunt Agnes’ for a week or two. Stopped at Montreal & Ottawa on the way. Will stop a day at Toronto on our way back. Haven’t seen much of Detroit yet. Are going to Belle Isle to-day. Tina.”

I’m guessing B92 stands for Barracks 92 at the Fort. Doctor Henning was Oswald F. Henning, who is listed in a military record for Fort Sheridan in July 1908, the same month and year of the postmark, (something out of the ordinary in our searches.) His rank is given as 1st Lieutenant, and Regiment or Corps shown as M.R.C. – Medical Residency Corps. The rest of this entry for him is difficult to read, but appears to indicate he may have also served at Fort McDowell, California…. As it turns out there are many similar entries for Dr. Henning online. In piecing together his military service, we find he also served in the Philippines Feb. 1910 – Jul. 1911; Fort Columbia, Washington from Aug. 1912 – Oct. 1913; the Presidio of Monterey, California Nov. 1913 – Oct. 1914; Camp Fort Bliss, Texas Aug. 1916.