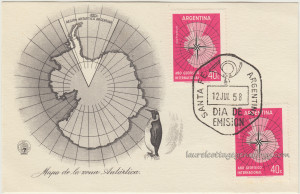 This is the first First Day Cover I’ve ever picked up. I have to admit that prior to researching this card I knew nothing about First Day Cover, a.k.a. First Day of Issue collecting. I bought this because I hadn’t yet come across any postal related items on Antarctica and because the penguin is adorable! So, I went to the American First Day Cover Society website and took their FDC Short Course, and learned that the FDC is a card or an envelope that bears a cancelled stamp for the first day that stamp is put on sale by the postal authorities. In this case we have two stamps with the nice cancellation mark (I like the bugle) showing that July 12, 1958 was the first day of issue for this stamp, and showing the city and country of issue was Santa Fe, Argentina. The artwork on the left is called the cachet (pronounced ka-shay as in the french pronunciation.) This cachet shows a map of Antarctica (Mapa de la xona Antártica) with the region marked off at the top that was claimed by the country of Argentina. This first day cover was issued before the Antarctic Treaty was enacted in 1961. Per a Wikipedia entry, the Antarctic Treaty and related agreements (collectively known as ATS or Antarctic Treaty System), currently has 50 signatory nations and “sets aside Antarctica as a scientific preserve, establishes freedom of scientific investigation and bans military activity on that continent.”

This particular stamp honors the Año Geofisico Internacional (International Geophysical Year or IGY.) Per another Wiki entry, the IGY was an international scientific project, in which 67 countries participated in eleven earth science studies on the topics of aurora and airglow, cosmic rays, geomagnetism, gravity, ionospheric physics, precision mapping, meteorology, oceanography, seismology and solar activity. The project lasted from July 1, 1957 to December 31, 1958, (ending almost 55 years ago to the day, as I am just noticing that the day of this posting will be December 30th.) Both the United States and the former Soviet Union launched artificial satellites to commemorate the IGY.