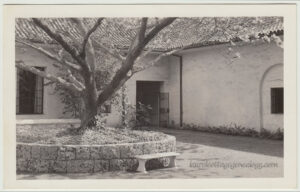 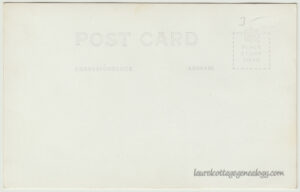 A courtyard (maybe). We can’t see whether this fits the definition of an enclosed or semi-enclosed space. The card was found in California, and there’s a good chance that the photo was taken there. This view is beautiful in its simplicity. Spanish-style home, with tile roof. Note the beautiful wrought iron gate, the archway around the window on our right. Is that a magnolia tree? And the wooden or stone bench, if not marble. I love the pavers stones around the tree, how they are quite pitted and rustic. I didn’t see any of the same type online. In general, they go under a variety of terminology, found online as “stone tree ring planters” and “retaining walls around trees” and “stone planter beds and “tree mulch rings.” The home owners have planted some type of ground cover around the tree and some ferns by the side wall. No earth-shattering revelations here…..just a nice, restful photo that someone made into a postcard. 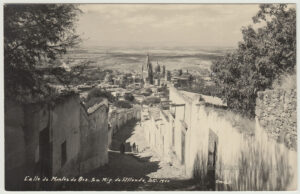 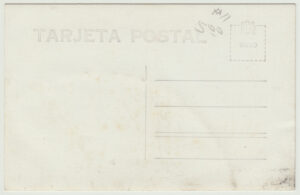 These types of cards are always intriguing at purchase (and beyond). You’re dying to enlarge the image so you can see more detail…..but just in general, any photo or painting, drawing, etc. that leads you down a path….well, it’s always an invitation to explore. And for me, after soaking in the pastels of the previous card, I want to fill this one in with color, too. So, here’s our quick “fix” below:

Calle de Montes de Oca can be translated from Spanish as “Goose Mountains Street.” It’s located in the city of San Miguel de Allende, in the Central Mexican state of Guanajuato. And the church in the distance, La Parroquia de San Miguel Arcángel, is said to be one of the most photographed in Mexico. 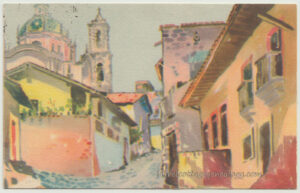 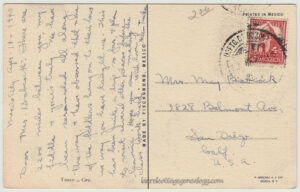 Moving from California to Mexico in our posts – we’ll start off with a colorful card of a Taxco street scene by an unknown artist. In the background is the Church of Santa Prisca. And it’s sometimes assumed, on these type, that F. Sanchez (per the printing at the bottom right on the reverse) is the artist, but Sanchez is actually the printer. This was confirmed by finding another card by publisher, Fischgrund, with the same F. Sanchez info, but by a very well-known artist.

“Mexico City. Apr. 13 – 1940. Dear Mrs. Babcock:  There are 2200 miles between you, my fiddle & yours truly. We have been serenaded all along the way & have observed that none of the fiddlers hang on to their bows the way you have taught us. This has been quite a trip so far, & plan to visit several other places before leaving. Hope you are making the class work hard. With love – Helen Tucker”

Mrs. May Babcock, per an article in 1941, was the director of the Oneira Club violin orchestra, in San Diego County. The Oneira club was a charter of the San Diego Chapter of the Federated Women’s Club. Per census and other records, Mrs. Babcock was born May Andrews, in 1867, New York. She married Lee Roy Babcock in about 1897, and taught music for many years. Their daughter Joy May Babcock, who remained single, also became a music teacher and had her own studio.

As for our traveler and postcard sender, Helen Tucker, it’s unclear from records whether there is more than one Helen Tucker (Mrs. Helen C. or Mrs. Helen R. Tucker) but it seems she was married. She is found mentioned in the clipping below: 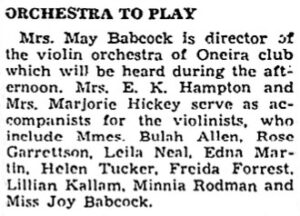