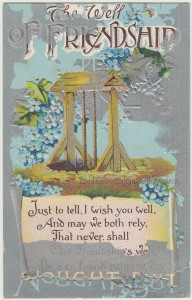 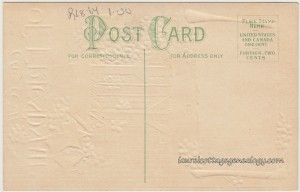 Just to tell, I wish you well,

And may we both rely,

Beautiful embossed postcard regarding friendship showing a well with ivy and forget-me-nots with some overlay of silver tone. It seems odd that the “Nought But” part is at the bottom. Was it supposed to be “Nought But the Well of Friendship” or just “Nought But” regarding this is just a friendship card? Also odd that the silver runs over on the last few lines of the card. Was this supposed to be like an early scratcher? (half-way joking) But no, the silver tone doesn’t scratch off.

Divided back, embossed, unused postcard. Circa 1912. 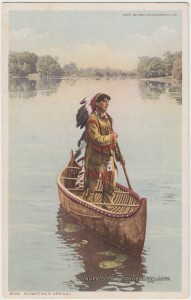 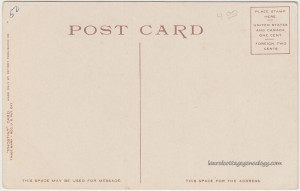 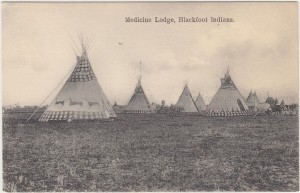 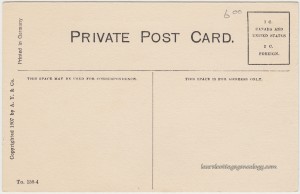 Medicine Lodge, Blackfoot Indians. The Blackfoot were located in the Northern Great Plains, most sources indicate Montana, U.S.A. and Alberta and Saskatchewan, Canada. 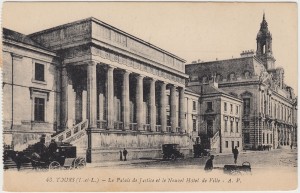 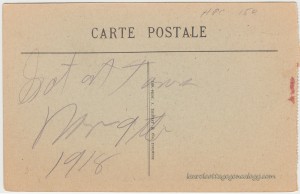 This is one of those postcards that come in a set. You can see the perforated edge. On the back is scrawled, “Got at Tours Nov 9th 1918” which of course is during WWI, so it could have been brought home by someone who served in the military. And according to a Wikipedia entry, “The city was greatly affected by the First World War. A force of 25,000 American soldiers arrived in 1917, setting up textile factories for the manufacture of uniforms, repair shops for military equipment, munitions dumps, an army post office and an American military hospital at Augustins.” The description on the front of the card is “46. Tours (I-et-L) – Le Palais de Justice et le Nouvel Hôtel de Ville – A. P.

I et L stands for Indre et Loire, a department in central France, of which Tours is the capital city. The department was named after the Indre and Loire rivers.

Divided back, unused with writing postcard. Circa 1918. “Imp. – Phot.  A. Thiriat & Cie, Toulouse”  (Imp from the word imprimer? to print. Cie is the abbreviation for compagnie – company) 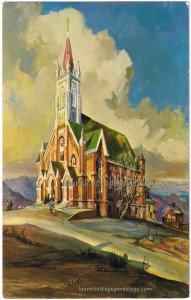 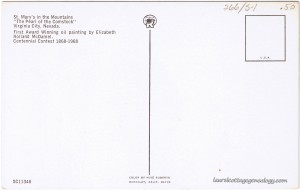 Pearl of the Comstock

St. Mary’s in the Mountains Catholic Church is the oldest church in Nevada. This postcard depicts Elizabeth Holland McDaniel’s beautiful oil painting entitled “Pearl of the Comstock.” At the time of this posting, I am not finding any duplicates of this postcard anywhere else online. There also doesn’t seem to be much available information on the artist, other than a description for her as “a mid-20th century artist.” The description on the back of this postcard could be interpreted several ways. Was the painting the artist’s first to win an award anywhere, or was the painting the first of the centennial celebration to be given an award, or did the artist win more than one award at the centennial but her first was for this painting? Since the celebration must have taken place in 1968, the painting might have been done in that year, or just guessing, maybe sometime in that decade, possibly 1960-1968.

Prestatyn is a seaside resort town in Denbighshire, Wales. Located on the coast of the Irish Sea. The town of Rhyl (mentioned by the sender of the postcard) is located about 4 miles west of Prestatyn, and is also a seaside resort town. Although the year the card was mailed is unreadable, the stamp used is a King Edward VII “yellow green” which possibly dates this postcard from around 1904 – 1910. The postcard was addressed to:

“Dear J(?), It is lovely here. We are going to Rhyl one day. Wish you were here. Sitting in the garden writing these with love, Elsie.”

The Williamsburg Bridge crosses the East River in New York City connecting the Lower East Side of Manhattan with the Williamsburg neighborhood of Brooklyn. At the time it opened in December of 1903, it was the longest suspension bridge in the world.

This postcard must have, at one time, been in the possession of the recipient’s daughter, Bettie Ogden, per the writing at the top of the back of the card. The 1925 Iowa census shows Lucile (Umbenhauer) Ogden, born about 1893, her husband Parke Ogden, her parents Daniel Umbenhauer and Luella (Way) Umbenhauer. The 1940 Federal Census record shows Lucile and Parke’s daughter Elizabeth Ogden, born about 1930, daughter Constance Ogden, born about 1926, and other family members. As to the sender, research indicates he is Harold Way, as Harold appears on the 1905 Iowa census residing at 932 Park St., Grinnell. Harold Way and and Luella (Way) Umbenhauer were siblings, so Harold addressed this card to his niece, who would have been about 16 years old at that time. From the content of the postcard, it sounds as if Harold may have been in architectural school…Further research shows Harold David Way, born 4 Oct 1883, occupation “Draughtsman,” employed by A.C.Bossom at 366 5th Ave. New York, and married, wife’s name Elizabeth, on the WWI Draft Registration Card. A.C.Bossom was London-born architect, Alfred C. Bossom (1881-1965.) The 1920 Federal Census taken in NYC confirms Harold’s occupation as architect, and shows him with his wife, their son Arnold, and a boarder, Ethel Daniels.

Postcard showing the Château de Chillon, a castle located on the banks of Lake Geneva, Switzerland. In the background lies the city of Montreux.