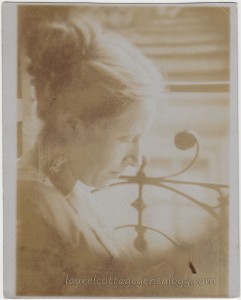 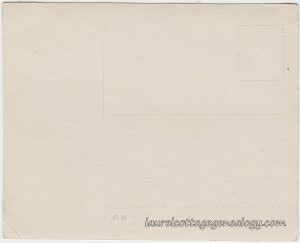 Here’s an old Real Photo Postcard of a beautiful German woman that was found at a recent San Francisco Vintage Paper Fair. (You can barely see the dotted lines on the back of the card, noting the stamp box which seems to confirm that this is an RPPC.) I bought this one for two reasons:  I love the composition of this photo, the woman’s lovely profile, the gorgeous bit of ironwork just to her left, and secondly because she immediately reminded me of my grandmother – of course also beautiful – who was Felicitas Emma Maria (Voss) Oliver. My grandmother was of full German descent, from Cincinnati; both sets of her grandparents were born in Germany, so I was tickled but not really surprised to learn that Helma was German. Thanks so much to Sharon, who sold the photo to me, who kindly looked up all the information she had on Helma, which I’ve included below in her email to me:

“This woman was named Helma Greiner. I don’t know her parents’ names (possibly the mother was named Mathilde or Hilda) but Helma was one of 6 children from a well-to-do German family that for a short-time lived in Bologna, Italy (around 1880). Helma had a twin named Tilla who died at the age of 5. They were both born in Germany approximately 1878. Helma had another sister, Adelheid (Ada) and 3 brothers, Otto, Ernst and Adolf. Leaving Italy,  the family went to live in Moscow for a while – perhaps 10 years, and lived there until the very early 1900s and then the family moved to Dresden, then Jena, Germany. This photo was taken, I think, sometime between 1905 and 1915. I can’t say for certain WHERE this photo was taken (Dresden or Jena). Ernst was killed in Belgium 1914 during WWI. Otto was also a WWI soldier but faked being goofy to avoid being sent into conflict.

They were a very lovely and attractive family (and all were blonde). Their descendant is an 80+ year old German lady with whom I met several times about buying the family photo albums – and she had many nice stories. A lovely lady. I think all the good photos of the family are already sold, but believe there are still a few of Helma during the “wandervogel” in Germany. Should I come across them in my “credenza”, I’ll let you know!”

Check out Sharon Karam’s website at www.darosieplanet.com with a link to her eBay store that has tons of way cool antique and vintage ephemera for sale.

Just on a last note, at least for now, I did do a quick search for Helma Greiner and family (nothing time-consuming, you understand.) Nothing jumped out at me in online records or family trees, but wouldn’t it be something if there was a relation to Helma and my grandmother, Felicitas. Maybe I’ll get around to searching later (for now – so much other stuff to put up – waiting in acid-free containers, of course.)