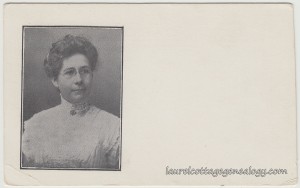 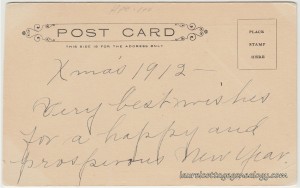 What doesn’t jive with this postcard? This is an Undivided Back card, the era for which ran officially from December 24, 1901 to March 1, 1907, as created in changes in U.S. postal law. So the photo of the pretty lady wearing eyeglasses (come to think of it, the glasses are not that common in old photos) would have been taken prior to March 1, 1907, perhaps from 1902 through 1906, if not a little earlier than ’02, allowing for the fact that the photo might have been one that she’d had taken a couple of years prior…..The back postcard header shows a beautifully delicate design from an unknown publisher.

After just posting this one, I got to wondering when and how the term “Xmas” came to be. Having, like many, always associated it with commercialism, I was surprised to find out that “Xmas” has been around since the mid-1500s:  “X” (the Greek letter “chi”) is the first letter in the Greek word Χριστός, which translates to English as “Christ.” And “mas” is the Old English word for mass. (Cool!)

“Wishing You a Merry Christmas and a Happy New Year.” 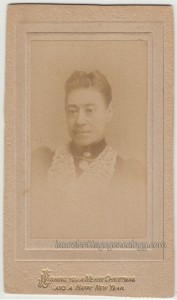 No name on the back or photographer name, just a photo of a woman sending her Christmas and New Year’s wishes. She is perhaps in her fifties, with a very sweet expression. Her hair is swept up and back. She wears a crocheted white vest over a dark-colored dress or blouse with high collar, sleeves puffed at the shoulder, which may date the photo from the 1890s, a necklace with round pendant and a smaller brooch. 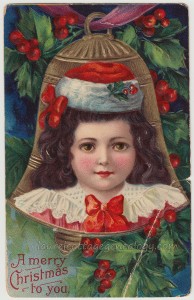 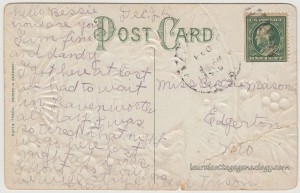 “A merry Christmas to you.”

Here’s one for all you holiday travelers:

“Dec. 25. hello Bessie, how are you. I am fine and dandy. I got here at last, we had to wait in Leavenworth all day, I was so tired that night. We go[t] here last night at dark. I dont no how long we will stay. From Gladys Tyson.”

Bessie must surely be the Bessie Masoner, born 1897, daughter of Teater and Minnie Mason, appearing on the 1910 Federal Census. Though the postcard year is difficult to read, if it was sent timely after it was purchased, it would have been prior to 1915, as the gorgeous card was printed in Germany (those colors! not to mention wonderful design) and WWI shut down the postcard printing there at that time. So, prior to 1915, but it looks like it might be 1910 for the date. And Bessie appears on the 1910 with her parents and siblings (Oscar, Elsie, Leland and William) living in Preston Township, which is about four miles south of Edgerton. 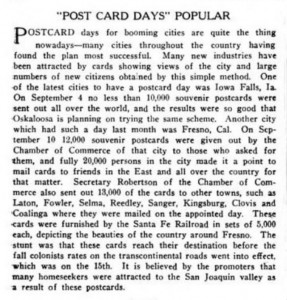 Here’s an interesting article from a 1912 Geyer’s Stationer publication talking about postcards as a means of attracting new people and new business to an area, with thousands of cards sent out by individuals, and City Chamber of Commerce. Mentioned specifically is Iowa Falls, Iowa’s success; Oskaloosa, Kansas’ plan; and Fresno, California’s campaign with help from the Santa Fe Railroad, that is believed to have brought in many new settlers to the San Joaquin Valley.

Below are two scans from the prior post (1913) by publisher Woodbury E. Hunt, and a 1912 ad for Huntwood Art Publications found in a stationer journal.

Woodbury E. Hunt, son of Bath, New Hampshire natives, Albon Hunt and Jane Mitchell, was born in St. Johnsbury, Vermont, October 30, 1857. WEH started out his career as a bookstore clerk, then had a couple of bookstore/stationer/art supply partners before going into business on his own and becoming incorporated in 1907. He married a woman named Marion in 1919 or prior (the marriage record was not found) and did a little tax collecting in his mid-sixties. He died in Concord, New Hampshire December 25, 1937. The postcard we have from his company is very nice, high quality, a little heavier than the average card and quite stylish.

A timeline from records not all-inclusive….

The 1880 Federal Census for Concord finds him living with his parents (Albon’s occupation listed as Picture Agent) and older sisters, Emma J. Hunt and Grace E. Foster. Woodbury’s occupation at this time is Clerk in bookstore. The 1887 city directory lists him as a clerk at 81 N. Main St.

In 1887 or ’88 he must of officially went into the stationer/bookseller/art supply etc. business under Hunt & Wilson. This partnership was short-lived as by 1889 he is under the business name of Hunt & Greenwood, per the below ad. 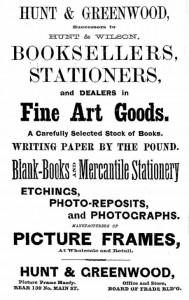 An 1891 directory online appears to be missing the advertisement, but shows a listing under just Woodbury E. Hunt, address 85 N. Main. 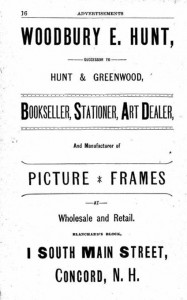 In September 1907 he became incorporated as The Woodbury E. Hunt Co., according to the 1913 city directory which showed his capital at $43,000.00 with himself as president; Charles T. Staniels, vice president; Arthur H. Knowton, secretary-treasurer. Art publishers, 28 S. Main.

By 1919 he had married Marion (maiden name unknown) and by 1922 he was doing tax collecting. 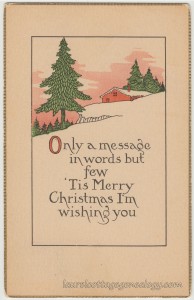 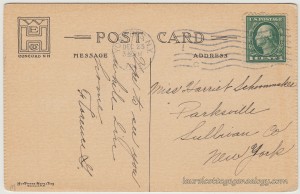 A simple, but elegant winter scene of evergreens and a red house with snow-covered roof, at sunset, with the greeting:

“Only a message in words but few

The sender wrote:   “Hope to see you while I’m home. Florence G.”

Harriet is probably the Hattie Schoonmaker that shows up on the 1910 Federal Census for Liberty, NY which is about 4 and 1/2 miles south of Parksville. She is the daughter of John and Hortense Schoonmaker, and appears on the census with her parents and brother Thomas. Hattie was born in New York around 1888, so would have been about twenty-five when she received the postcard from Florence. 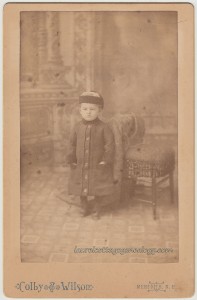 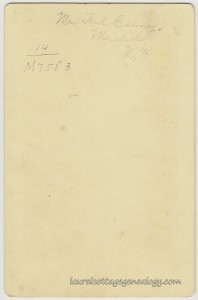 Cabinet Card photo of a little boy, (love the expression) about three years old, posed standing with hands in pockets, dressed in a long wool-looking coat with contrasting darker-colored cuffs and collar, the collar buttoned snug at the neck, and a winter hat with tassel. Someone, at some point, took the liberty of filling in the eyebrows and darkening the eyes a little.

It’s more probable than not that the little boy in this photo is the son of Fred Canney, according to the writing on the back which shows,  “Mrs. Fred Canney. Meredith, N.H.”  If this is correct, then it’s possible that this is a photo of Wilfred A. Canney, born about 1883; son of Fred Canney and Annie Martin. Wilfred married Alice B. Cummings on December 1, 1908 in Meredith, NH.

The photography studio of Colby & Wilson is more of a mystery. Nothing was found in online searches other than an image of the reverse side of one of their cabinet cards, currently appearing on Pinterest, though there are several possibilities showing up for individual photographers in other New Hampshire cities. 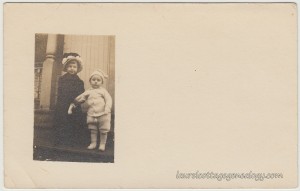 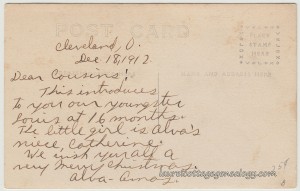 What a cute photo! And we’ll get started on the Christmas greetings a little early, since we have so many to put up. The stamp box on the back of this RPPC shows Velox, and it’s always nice to be able to have a reference point (date-wise) for future Velox stamp boxes we come across.

Louis D. Newton, is the son of Amos Newton and Alva Duerr. Louis was born in Cleveland, Ohio according to his marriage certificate. In 1934 he married Genevieve Vrana. According to his dad’s note, Louis would have been born about August 1911. Catherine was not found for sure, though she could be a Buehler or a Duerr. 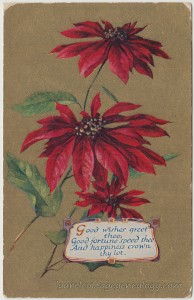 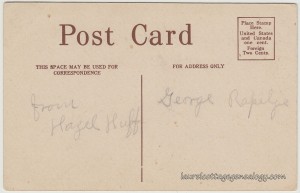 And happiness crown thy lot.”

Poinsettias on a gold-colored background. The poinsettia is a species of the spurge family, and indigenous to Mexico and Central America. The common name for this plant comes from the first United States Minister to Mexico, Joel Roberts Poinsett (1779 – 1851) who introduced the plant to the U.S in 1825. Poinsett also served as the 15th U.S. Secretary of War. Some quick online family tree searching shows that the surname appears to have been french, and with the Poinsett family having a long and early connection to the state of South Carolina.

Since this postcard was not sent via the U.S. Postal Service, we have no clue for the locations of the sender or recipient. There are several possibilities, Michigan and Kansas being among them, but nothing jumps out at us for these two names appearing in the same city.