As mentioned, in the post prior to this one, this is the same font style with arrows in the capital letters, but no relation to the two people, as far as we can tell. It looks like this was a fairly common name, so there are a number of possibilities for this person. Also, and not saying that it was, but another possibility is that this could have been just a sample card with a fake name. (Yikes, here we are sometimes searching for someone that did not exist, chuckle.) But personally, I prefer to think of this person as really existing and carrying this card. 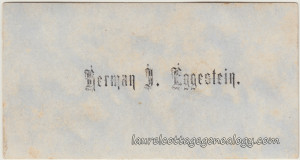 Calling card with glossy finish for Herman J. Eggestein. The font type is very distinctive with the arrows going through the capital letters. This card was found in an antique store in Watsonville, California along with a few others. The next post will be of another calling card with the exact same font style, and one then wonders if the two people are connected somehow, or if they lived in the same area and maybe used the same printer, but I didn’t find any records that hinted at that. I did then go looking online for other cards with that same arrow style, and did find one other. (I wonder how many font styles there were to choose from.) The background is one I’ve not seen yet, and reminds me of a blue sky with some thin clouds.

In searching for this person, a marriage record was found for a Herman Eggestein and Clara Hausfeltd, married in Jackson County, Minnesota in February of 1898. (Ever so sadly, this couple was killed by a cyclone, in August of the same year. Herman was 26 and Clara was 20. Find A Grave records do show Herman’s middle initial as J.) No other entries were found for a Herman J. Eggestein, so it’s possible this was the same person, but we don’t know for sure. But back to the card itself, and just to try to end this post on a lighter note, it’s a very nice calling card, with a wonderful font style. 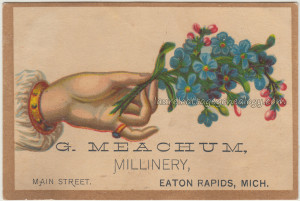 Calling card for G. Meachum in the millinery business, who was located on Main St. in Eaton Rapids, Michigan. As of the date of this post, a record of G. Meachum has not been located in online sources, though there is a reference found for a Mrs. M. H. Hackings, millinery on Main St. in the same city.

This calling card shows the oft-used (but lovely) image of a hand and flowers. In this card the flowers offered are forget-me-nots, and part of the sleeve is visible, a blousy sleeve gathered at the wrist with a studded gold band, with the offer-er wearing a gold and blue ring on the little finger.  Does this remind you, too of an old arcade fortune-teller gypsy? Estimating the date of the card is maybe from the late 1800s.