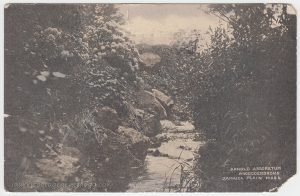 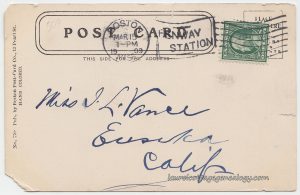 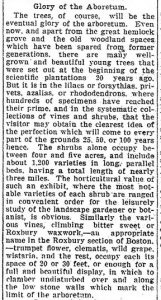 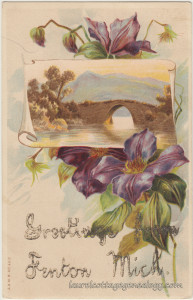 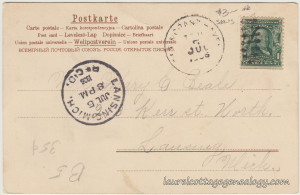 Beautifully done, non-divided back postcard, printed in Germany, showing purple clematis and a scene perhaps designed to resemble a painting on unfurled canvas of a stone bridge over a river, with mountains in the background.  The caption  “Greetings from Fenton Mich.”  appears in cursive glitter. A stunning postcard.

Mary E. Beale, born Canada (of Scottish descent) about 1872, appears on the 1910 Federal Census taken in Lansing, with husband Charles F. Beale, born Michigan, about 1874, along with their son, Stanley, born Michigan, about 1905, and Charles’ mother Mary A. Beale, born New Jersey, about 1835. Charles’ occupation is listed as Picture Framer, and the address given on this census is 213 Kerr. There is no writing on the front (or back) indicating who the sender was. (We wonder if the choice of postcards had anything to do with Charles’ occupation.)