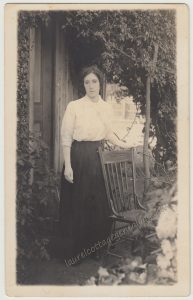 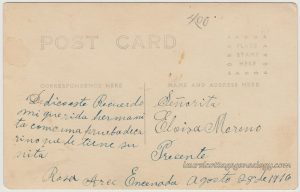 This Real Photo Postcard from 1916 shows a graceful young woman, standing on a porch, her hand resting on the back of a wooden chair. The composition is wonderful:  the door slightly ajar, the arbor effect of the vines, the roses in the right-hand corner, the glimpse to the street in the background. The woman has a narrow, oval-shaped face, is dressed in a long dark skirt, white blouse with lace collar, and if you look closely you’ll notice she’s wearing long gloves of a very thin material. She writes:

It seems “hermani” should be hermana (sister) and possibly  “nita” should be nieta (granddaughter). “Encenada” is Ensenada, so the photo was probably taken in Ensenada, Baja California, Mexico, however there is a small town in New Mexico by this name and also a neighborhood in Guánica, Puerto Rico called Ensenada. I’m not understanding the full context with the reference at the end to su nieta (his/her granddaughter) however I believe the first part translates as:

Addressed to:   “Señorita Eloisa Moreno.”   (The word appearing underneath the name is a mystery at the moment.)

This Cabinet Card was likely done by Frank H. Hanson who is mentioned in the same book about Modesto that was just referenced two posts ago (re fellow photographer William Brown.)  And this is the third of four that were found together in Soquel, CA. The little girl in the last post almost looks like she could be the sister of these two, but we don’t know for sure, since there are no names on any of the four. This photo shows a child maybe one year old? a boy or girl (so hard to tell at this age since the boys were also dressed in beautiful cotton or linen gowns like this one) and the older brother in short pants, double-breasted jacket and pale striped shirt with just the large ruffled collar showing. The older child wears a round brooch of some sort on his jacket lapel. This decoration is intriguing since even up close we can’t see what design it holds, but we can picture the mother getting the children ready at home, pinning the brooch on the lapel….The younger child is seated on a wooden chair of bamboo? on a tasseled coverlet or rug. The photo composition is interesting:  both children are gazing into the camera, but especially interesting is the similar arm and feet placement – the similar stance of the older child to the “stance” of the chair – left legs slightly forward and standing on the prominent fur rug, and rights back slightly and just off the rug. It’s seems like when we notice these types of things, as touched on above re the brooch, it really makes us feel transported back in time, in this case to this Modesto studio in year 1890-something or so. We have insight into the photographer’s thought process and suddenly we are there…we picture him lining up the shot….

At the bottom right under the photo is the photographer’s stamp in red showing  “Hanson  Modesto, Cal.”  On several of the California Voter Registration records for years 1892 – 1898, Frank Henry Hanson is recorded as occupation photographer, born in Michigan 1868 -1870, residence E. Modesto, and is described as 5′ 8 and 1/2″, light complexion, brown eyes and light hair. (Two of three records say brown eyes, the other gray.)