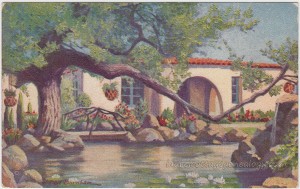 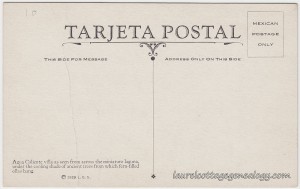 “Agua Caliente villa as seen from across the miniature laguna, under the cooling shade of ancient trees from which fern-filled ollas hang.”

1929 artist-signed Mexican postcard of a painting by John Paul Burnham, showing a view of the bungalows at Hotel Agua Caliente. The hotel bungalows were part of a grand Tijuana, Mexico resort, casino, race track and hot springs complex that was built in 1928, and was a major West Coast attraction for the rich and famous.  (Movie star Rita Hayworth is said to have been discovered there while dancing in a show.) The resort was particularly popular since at that time Prohibition was in effect in the U.S. and gambling was also illegal in the States. With the change in gambling laws in Mexico the casino was closed down in about 1935 (another source indicates 1938) although the racetrack continued to operate for many years. Sadly, as so often happens, most of the buildings fell into disrepair and were destroyed. (Among others the notable minaret remains.) The hotel buildings were used as a school, but most of those were demolished and rebuilt years later. If you have the time, check out the websites below (and/or any others) as well as related images galore online. This short paragraph here is just by way of identifying the location of this postcard. See the post on this Laurel Cottage site for more about the artist.