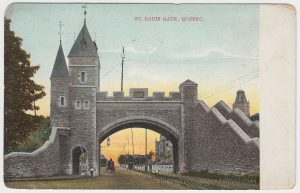 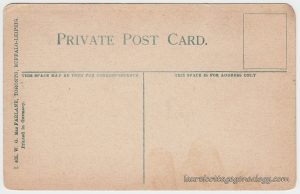 The Canadian postal regulations allowed for the Divided Back postcard as of December 18, 1903, hence the start of the approximated date for the card. Prior to the new regulation, any message from the sender would have been written on the front of the card. So, because of the blank space on the front, we wonder if this card wasn’t maybe produced at or shortly after the regulations changed (almost like an example of a very short under-the-radar sub-era appearing between the “Private Mailing Card” that can be found on Pre-divided backs and the “Post Card” printing on the Divided Backs, and don’t we imagine the printers and publishers scrambling a little as they changed over?)

The St. Louis Gate is one of the four ramparts of the city (a good word – rampart – up till now I never realized this was the word in use, nor that there is a junior hockey team named after them.) Anyway, in general, we like to see what was being said about a subject back in the day, so here’s a clipping from an article that appeared in The Scranton Tribune (PA) in 1894. At the time the article was written, the present-day St. Louis Gate was still fairly new, having been re-built about fourteen years earlier, and re-built maybe about twenty-four years or so before our postcard was published. But to correct the article:  Princess Louise laid the cornerstone of the Kent Gate, not the St. Louis Gate (though it was Princess Louise who declared that the gate known as St. Louis would retain its name.) It was Lord and Lady Dufferin that laid the cornerstone of the St. Louis. 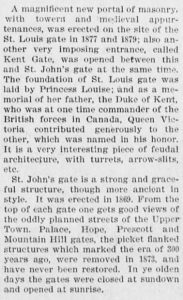