Charles H. Twelvetrees is well-known to vintage postcard, and ephemera collectors in general for his many illustrations, mainly of chubby-cheeked children, which often are shown with funny captions. I put up the two examples that I have from postcards below (cropped and cleaned up a little in Photoshop.) His work can also be found on magazine covers, in newspapers, on calendars, and as valentines of that era. To mention a couple of particular examples, he was the illustrator for a children’s story by Seymour Eaton, called “Prince Domino and ‘Muffles’ ” and he did a comic strip called “Johnny Quack and the Van Cluck Twins.” (Some accounts say Van Cluck Sisters which, unless the strip name was changed at some point, is incorrect. Images can be found online of the comic strip showing the last word in the title as “Twins” not “Sisters.”) It’s also interesting to note that the 1900 Federal Census shows Charles’ occupation as “portrait artist.”

After looking online for information about this artist (for the prior post) and finding conflicting information, which some others have also been questioning, namely the year of birth, that there was also a Charles R., that the father of Charles was also an artist, I decided to make a list of online records to try to see if I could find some answers. I also noticed speculation about a Hollywood connection for a possible son of Charles Twelvetrees.

So, it was funny, but after doing quite a bit of research, I came across a website for someone who has written a book about the artist, author Robert William Mellberg. So, I will not go into great detail here, as Mr. Mellberg, who has done years of research, as opposed to my ummm week (shaking head and chuckling) will be the authority. A good lesson learned:  If someone is well-known, there’s probably already been a book written about them! But anyway, I did want to post something as there are so many examples online of the incorrect information for Charles H. Twelvetrees, and so am putting this up in the hope that it will help in the correction process.

It’s the 1920 U.S. Federal Census for Manhattan, New York that shows the wrong year of birth of 1888. Charles’ age is listed incorrectly there as 37. The best source for his date of birth from the census records is the 1900 record which states he was born July 1872, and the other census’ collaborate this year, being exact or a year off.

Charles’ father, Henry Twelvetrees, was a carpenter. There are simply scads of records that show this: both federal and state census’, as well as many Utica, New York city directories and at least one New York City directory, and none of those records show a middle initial. So, Henry never worked as an artist in the context that we’re looking at here. (Although perhaps he was an “artist” in the field of carpentry. And it’s interesting to see that on one of Henry’s census records (1910) he is listed as a carpenter in the shipbuilding industry.) But the “R” as a middle initial for Charles or Henry or anyone else that one could try to attribute to the art in question is incorrect. (See Mr. Mellberg’s website listed below for more on that.)

According to author, Robert W. Mellberg, artist Charles H. Twelvetrees was married three times (I had found two.) His second marriage was to Rose B. Clark, and they had one son, Clark Twelvetrees. Clark married Helen Marie Jurgens. Helen was married several times but kept her first married name, and is better known as Hollywood and stage actress, Helen Twelvetrees.

As a side note, the 1905 New York State Census for Manhattan, New York shows Charles and wife (Rose) living at the address given of 37/45 West 22nd St. Living at the same address, which is presumably an apartment building or buildings, are ten other artists, two of whom are women. I just find this interesting. Their names as they appear on this record are:

Here are the images from the two Charles Twelvetrees postcards that I have, as stated above (cropped and cleaned up a little). And please see the first source listed below for author Mellberg’s website, and detailed information about the artist, including a photo taken of him while he was working. 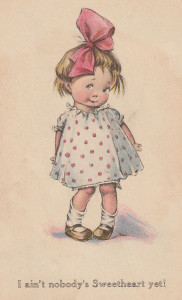 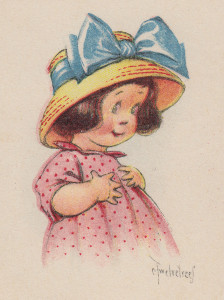