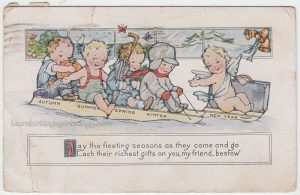 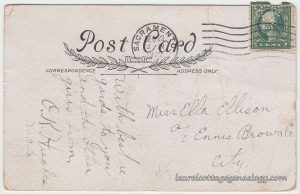 “May the fleeting seasons as they come and go

Each their richest gifts on you, my friend, bestow.”

We wish they were a little less fleeting, but here’s to beautiful moments in every season, with love and friendship to all! And this is a cute one, quite worn, but very adorable, and of course, part of our Alice Ellison collection. The “city” in the addressee’s “direction” to borrow an old term, is of course, Sacramento. And we find that postcard senders often distinguished this part of the address in just such a fashion, as this card was, for the time being anyway, staying within the city limits. The sender wrote:

The W. C. Company wasn’t found, though we did not spend too much time in the search, but here’s an Ennis-Brown ad from the California Fruit News, December 1922. Ella likely worked as a clerk for this fruit and produce company. 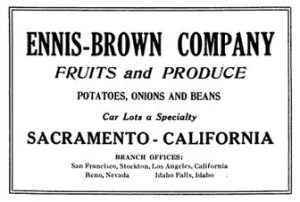 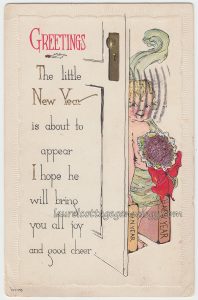 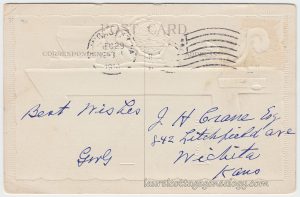 “The little New Year is about to appear.

I hope he will bring you all joy and good cheer.”

Does the Little New Year carry a cabbage? (Does the deer have a little doe? Yeah, two bucks! Couldn’t resist 😉 ) Back to the cabbage:  It would appear so, and that would be for good luck and prosperity. Here are a couple of great articles found regarding cabbage and the New Year:

This second one references the cabbage being punted thru the front door. Not quite what we have on the postcard but the lucky vegetable is on the doorstep.

“Kicking In The New Year By Punting Some Cabbage”

Below, a newspaper clipping that appeared in the New Oxford Item (New Oxford, PA) on January 5, 1922 on New Year luck, superstitions and courage:

On the reverse of the postcard:  Is that  “Best Wishes, Girls?”  Not sure who the signer of the card was, but they addressed it to:

J. H. Crane Esq., 842 Litchfield ave, Wichita, Kans.”   J.H., parents and siblings were found in the 1915 State Census at this address. Kansas native J. H. would have been about 23 when he received the postcard.