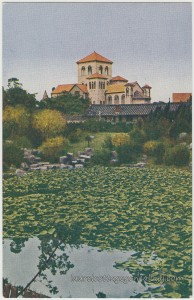 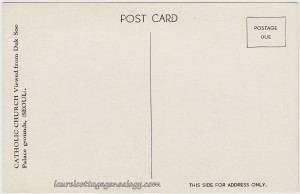 This postcard, from about the 1950s or 1960s, was found in the tourist postcard envelope of the prior post (but it would certainly seem unlikely that this one was part of that original set, since that cover references Japan.) The description on the back here is:   “CATHOLIC CHURCH Viewed from Duk Soo Palace grounds, (SEOUL).”

This church, located at 3 Jeong-dong, Jung-gu in Seoul, South Korea, is the Cathedral Church of St. Mary the Virgin and St. Nicholas, but is also known as Seoul Anglican Cathedral or just Seoul Cathedral. It was built in the Romanesque Revival architectural style, and opened in 1926. Among other things, the church’s construction history is very interesting and has a quite unique aspect about it. It was actually completed in 1996, due to some major help from a British tourist, who after visiting the church in 1993, went back to England and located the original blueprint of the church at the museum where he worked! The original design, by British architect, Arthur Dixon, was to construct the church in the shape of a cross, but this didn’t happen due to financial problems. So, it wasn’t until about seventy years later that Dixon’s vision finally became a reality.