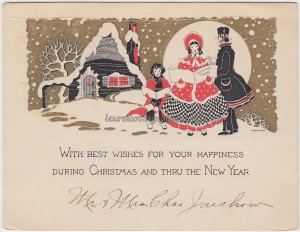 “With best wishes for your happiness during Christmas and thru the New Year.”

Well, here is an absolutely heavenly card!  It was done in colors of gold, black, red and white on off-white. It’s design shows a 19th-century family consisting of a man, woman and little boy, outdoors singing Christmas carols. The moon is huge in the background, the snow falls through the golden night sky. The three have walked down the stone pathway from the charming Tudor cottage-style home on the left. Love the rounded door, the shutters, the tree showing bare branches behind the archway, even the little bush on the right, or rather I think that is meant to depict a tree top showing from the other side of the hill. Notice the detail of the door hinges, the stonework around the door; not to mention the clothing of the singers, the sweet expression on the woman’s face, the boy’s expression and fluttering long winter scarf, the way the gentleman is interestingly turned facing sideways so that we see his profile, while the other two face the front; his coat and top hat, the woman’s hooped skirt and fur-trimmed jacket and matching bonnet….Perhaps the artist drew the man facing to the side since his coat flares so much; it might not have worked so well to have his outline be similar to, or detract from the woman’s.

Very noticeable about this artwork are the patterns: the checkered pattern of the woman’s skirt, the swirl in the presumably wooden area under the roof peak, the contrast of the larger snowflakes with the smaller dotted fabric of the woman’s jacket, the stripes in the man’s coat. (One could gush on almost forever.) But we do have a very similarly styled Christmas card, that was put up here at Laurel Cottage early on. Check out the similarities to the card in this post entitled “May Your Christmas Be Merry.” It’s very possible that the two are by the same artist. (We’ll be on the lookout for more.)

As far as the time frame for this card, it’s hard to say – maybe 1900 through the 1930s. We do know that it was made in the United States, since it gives us that information at the bottom right of the scene. And the last name in the signature is definitely Jarchow; nothing shows up under alternate spellings. But a surprising amount of married couples show up in census records, at various times, in various states, for Charles Jarchow and spouse, so that won’t help to narrow down the date.

One last note as far as trying to date the card:  One might think that the use of  “thru” instead of “through” might be useful, as in when did we start using “thru?” However, the use of the shorter word has been around for over a century, according to numerous dictionary and word origin type references. Interesting, though (or tho!)