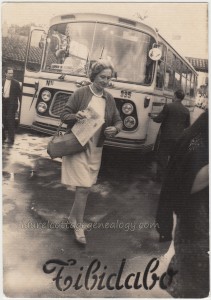 Here’s an unusual circa 1960s black and white photo, showing a woman in a knee-length dress and a cardigan, wearing flats and carrying a somewhat large purse and a newspaper. She may have just gotten off the bus or just be crossing the street. Upon closer inspection we notice she also has her glasses in the same hand as the newspaper. She’s a nice looking, middle-aged lady, wearing a slight smile, eyes downcast, focused on watching her step on the wet street, or maybe not wanting to look at the camera, probably out running errands for the day. A front and partial side view of a bus is prominent in the photo, and we see a couple of gentlemen to either side of the bus. We also notice a woman through the bus window, getting ready to exit. The sign in the bus window possibly states Servicio Nacional [?] That second word is hard to make out. There is a partial view of a tiled roof with what looks like a tiled overhead extension running above the street in the background, plus some cars lined up on the right, probably parked. (Don’t they seem close together!)

This could be a typical street scene somewhere on the Avenida Tibidabo (Tibidabo Avenue) in Barcelona, Spain, or maybe a scene taken on the route up to the mountain of Tibidabo. This mountain overlooks Barcelona, and at 512 meters (1680 feet) is the highest mountain in the Serra de Collserola range. It’s known for both it’s amusement park and Catholic church at the top. Since the word  “Tibidabo”  is displayed (very prominently) at the bottom of the photo, we wonder if this would be one of the tourist variety; the type where the photographer takes the shot of passersby, and then offers to sell them the photo. There is no photographer or other identifying info on the back, other than what looks like the initials “MY” – who knows what that might be. “Fibidabo?”  is written lightly in pencil, and that’s just evidence of probably the last owner of the photo taking a quick guess at the word on the front. (The internet sure makes quick work of searching.) The photo is in fairly good condition except for a prominent crease at the bottom right. If you enlarge the image you can see it.

Pegaso:  A Spanish make of trucks, buses, tractors, armored vehicles, and for a shorter time sports cars. Note the logo on the bus and the barely discernible nomenclature in script on the grill work below the logo. (How we love these ah-ha moments!) Pegaso (Pegasus – we are used to seeing the winged horse) was under the parent company Enasa, which was taken over by Iveco in 1990. The Pegaso name ran from 1946 – 1994, and their operations were headquartered in Barcelona.