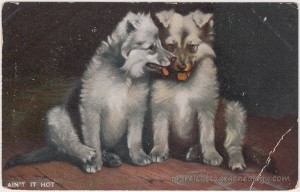 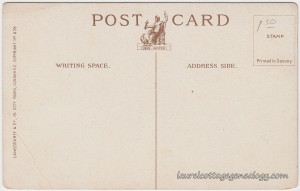 This was a new one for me – the publisher logo on the back header of Zeus/Jupiter, but the card is nice, too, showing a couple of dogs commiserating on the fact that it’s hot, especially when one has a fur coat. A timely one to put up in August re the “dog days of summer.”

According to a wonderful genealogy site for Hertfordshire, U.K., this publisher, Langsdorrf & Co., who referred to themselves as “Fine Art Publishers,” started selling postcards in as early as 1901. Reference is made to a postcard found from this date with the same address that appears on our postcard here of 19 City Road, London. However, according to this same Hertfordshire genealogy source, Langsdorff & Co. didn’t apply for their trademark logo until May of 1906, and then appears to have stopped trading in 1914 with the outbreak of WWI. The “E.C.” after London in the address, stands for Eastern Central, and refers to a group of postcode districts in central London.