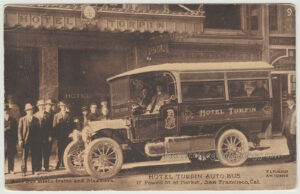 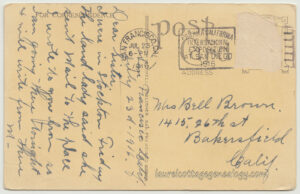 This postcard was likely produced from a newspaper or magazine photo. Interesting that there are no women in this picture. Wonder what type of event it might have been? You have your businessmen on the left and some of the staff next to them; all the passengers and the driver of the bus are men, and then there’s the guy standing behind the bus. Note the suitcases on the running board. There’s a Touring Club of America sign on the hotel awning. And apparently there was a pool. The business next door was Kingsbury & Unger, (G. Kingsbury and F. Unger) a liquor store at 21 Powell St.

“San Francisco, Calif. July 23rd – 1916. Dear Sister. I were in Stockton Friday. The land lady said she sent mail to the place I wrote to you from so I am going there tonight & will write from there.   M – “

Curiously, nothing definitive comes up in records when trying to find Bell (Belle). Nothing under Brown at this address in city directories. Maybe they were only there temporarily.

From the 1920 Federal Census for San Francisco, Edward H. Mitchell, postcard publisher, was born about 1869 in California, married to Idelle and they have three daughters, Gertrude, Bernice and Marion.