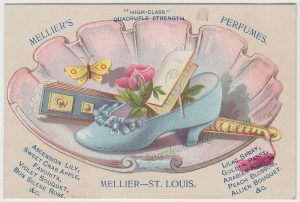 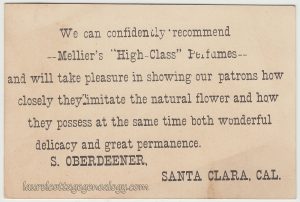 A lovely trade card in blue, pink and yellow showing a ladies shoe, a fan, a flower, a butterfly and a paper memento of some sort, resting in a large sea shell. This particular design was not the only one with this theme. There is another to be found for sale online showing a yellow shoe facing in the opposite direction. Mellier’s, based out of St. Louis, Missouri, was very prolific in creating fragrances over the years. We’ve counted a total of eighty, found on the web, including one called Ping Pong (!) The titles shown on this card are:

The advertiser on the trade card was S. Oberdeener, of Santa Clara, California, who stated,  “We can confidently recommend – Mellier’s ‘High-Class’ Perfumes – and will take pleasure in showing our patrons how closely they imitate the natural flower and how they possess at the same time both wonderful delicacy and great permanence.”

Samuel Oberdeener, per Find A Grave, son of Moses and Libby Oberdeener, was born in San Francisco, September 14, 1860 and died May 20, 1901 in Santa Clara, California. He was married to Emma Lauck. They had one daughter, Mildred. Sam Oberdeener was a graduate of the California College of Pharmacy in 1880, a member of the State Board of Pharmacy, Board of Town Trustees and an active member in the Masonic order, the Odd Fellows, Elks and Foresters. Oberdeener’s would have been well-known in the area, at the time of Sam’s passing, the store had been in business for over thirty years, Samuel having taken over from his father in 1882.

All of the perfume titles listed on the trade card, with the exception of Peach Blossom, were found advertised in The American Drug Clerks Journal, January 1889, Vol. 3. (A date for Peach Blossom was not located.) And since Samuel Oberdeener died in 1901, we would estimate this card to be from about 1889 to 1901. The pharmacy continued for some years after Samuel’s death. Below, an ad from the 1913 Santa Clara directory: