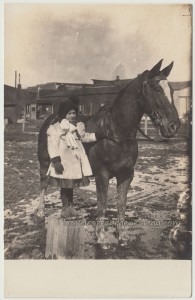 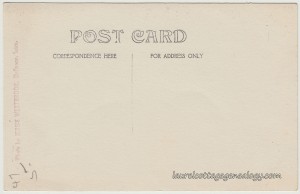 Oh! I hadn’t realized I had two by this photographer. Excellent! It’s a great one of a pretty girl (gazing downward) in coat, gloves and hat (how do you like that big pom pom, not to mention the big bow outside the coat?) She’s standing on a wooden mounting block, next to a beautiful horse (that sweet expression!), and she’s holding onto the reigns with one hand. It’s maybe late winter, early spring, the ground is wet and muddy. We see a conglomeration of buildings in the background. It’s not very affluent-looking, maybe these are farm buildings, but then it looks like we might have a main city street running behind them. For some reason I think England when I look at this photo. Don’t know why. The photo artist’s stamp on the back shows:

See the prior post for more on Miss Jessie Westbrook. 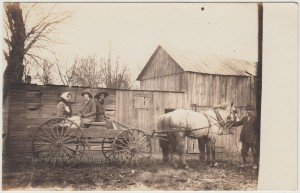 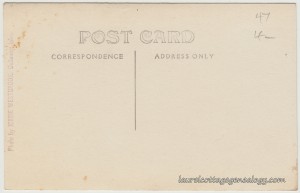