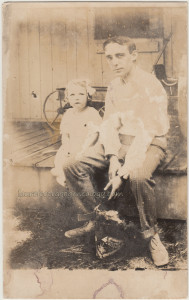 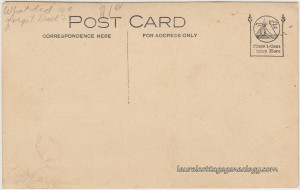 This one is priceless. A photo taken of father and daughter, and because of the above caption that appears on the back, and the pull cart that we see behind them in the photo, it’s a good bet that they are at the train depot, either waiting for the train, or waiting to be picked up after they got to their stop. It looks like that is a barrel on our far right. The other very interesting thing about this photo is that the dad is holding a pail with a crank and handle on top. It turns out that what he actually has there is a White Mountain Ice Cream Freezer. You can see that the label is coming off. I love both of their expressions, and the possible stories that weave themselves around this photo. It would seem like the writing on the back was done years later by the now grown-up daughter but it could have just as well been done by the mom, after the postcard was made. Either way we can just picture the little girl and her dad having a running joke about always forgetting to bring something on their train trips. And were they going to visit relatives, maybe to have a big family dinner, and then have homemade ice cream for dessert?

As far as the time-frame for this postcard, various online websites date this stamp box version of the sailboat as 1905 – 1908. However, as of the date this post is going up, I did not find anything identifying the name of the company that produced this type of printing out paper. (For example, the Eastman Kodak Co. produced SOLIO, and the Ansco Co. produced CYKO.) But I did find an illustrated ad in Hardware of this version of the White Mountain Ice Cream Freezer, dated January 10, 1907, so taking the stamp box and the ice cream maker into consideration, I am estimating this postcard to be from about 1908,  since the White Mountain label is peeling, so we’d assume the ice cream maker was not brand new. Of course, it could be from after 1908 as photographers sometimes used up old card stock.