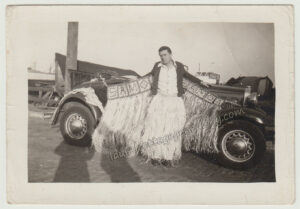 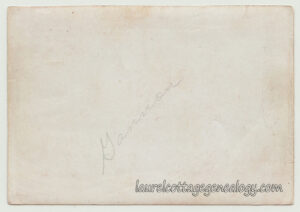 We look to the car in this photo for a jumping off point for approximate date. I was struck by the unusual-looking hubcaps and asked the hubby who stated the hubcap is the round center part, the rest is rim, maybe a 3-piece rim and they look painted, and it’s probably a Ford…..I was then checking Ford convertibles with rumble seats (you see it sticking up in the back minus the padding) but getting frustrated for pinpointing the year. No prob though, whenever I get stuck I go to the Antique Automobile Club of America forum readers for help. (Great people, lightning-quick, detailed responses, awesome!) And yes, it’s a Ford, likely with painted rims. Here is one of the responses below:

“Definitely a Model A Ford roadster – you can see the corner of the windshield behind the guy’s left shoulder.  The shape of the fenders and the bead on the hood above the louvers makes it a 1930 or 31.  However, the headlights might be 28 – 29 as they look a little pointy on the back.  30 – 31 are rounded.  It might be a DeLuxe as rumble seat was standard on those, although it was optional on Standards.  The back cushion is easily removed and yes, it’s missing.  The artillery wheels are similar to 36 – 39 Ford but I think they’re aftermarket.  They probably are composed of separate parts but welded and/or riveted into one piece (not counting the removable hubcap).  Yes, they probably were painted and the contrasting painted trim on the spokes was common on those style wheels.”

The dark-haired young man, about age 25 we’ll guess, is wearing a grass skirt (!) and posing for the camera. At first glance it kind of looks like the entire “Samoa” banner is part of his outfit and he unfolded it like a cape (or unfurled his “wings”  – gotta give credit to a different forum commenter for the wings idea – love it! Credit also due to another person for wondering if, what I’m calling a banner, could be part of a “traditional ceremonial dance costume”. Good thought.) But anyway, I think the banner was attached at each end to the car…..Presumably, either the guy’s given or surname is Gannon, since this is written on the back. (Yes, Gannon does show up in some records as a first name.) And there’s too many possibilities to try to pinpoint Gannon, or at least not without days of research, but maybe he was born around 1925, entered the Navy and traveled the Pacific, stopping in Samoa. (Just a theory.) And, though this photo could be from maybe the mid-’30s, due to its aftermarket parts, my first thought is that it was mid-’40’s to mid-’50’s for when this snap was taken.

Lastly, and if you’ve stuck with me for this long 😉 ……

In the background we see a couple of small boats perched on land, a telephone pole, a wooden fence, and on our left, maybe a couple of other boats further in the distance. We note that car and man are on a cobblestone surface. Last but not least, we see the two other people “appearing” in this shot – one was the person taking the picture. They were there, but we only see their shadows. (I love this type of thing – the contribution to the image via the shadows.)

Source:  “Help to i.d. a convertible with rumble seat.” Posted in “What is it?” Response by CHuDWah posted October 7, 2023. forums.aaca.org.