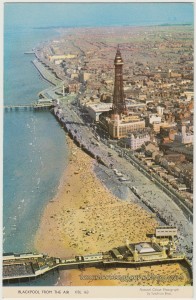 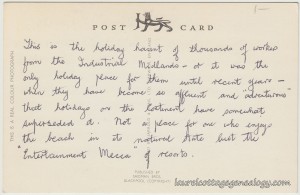 From an unknown with writing talent, this aerial view of the beach and coastline at Blackpool, Lancashire, England, is described on the back of the card:

“This is the holiday haunt of thousands of workers from the Industrial Midlands – or it was the only holiday place for them until recent years – when they have become so affluent and ‘adventurous’ that holidays on the Continent have somewhat superseded it. Not a place for one who enjoys the beach in its natural state but the ‘Entertainment Mecca’ of resorts.”

That’s the Blackpool Tower dominating the photo, a tourist attraction inspired by the Eiffel Tower, and opened to the public in May of 1894, which was only just over five years after le tour Eiffel opened.