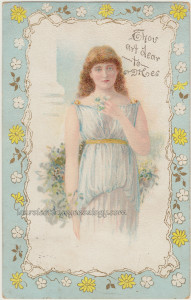 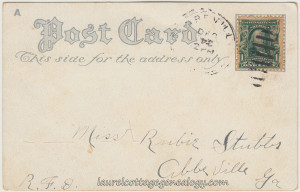 Undivided back, used postcard, circa 1901-1907. The cancellation mark shows Abbeville and appears to indicate the month of December, but the year is missing.

Beautiful undivided back era postcard in muted tones (except for the yellow) showing an image of lovely red-haired woman in what appears to be a Grecian or Roman style dress, holding a sprig of flowers, with the caption, “Thou art dear to Me.”  We see some flowers directly behind her and the suggestion of a column. The border is done in a robin’s egg blue with a simple design of yellow and white flowers.

The back’s lettering shows the words “Post Card” and “This side for the address only”  done in a silver tone. At the top left is a small block letter “A” which may be the publisher logo, but nothing, as of yet, has been found for this supposed publisher. (Another one for the mystery category.) The card is addressed to:

“Miss Rubie Stubbs. Abbeville GA”  with  “R. F. D.”  written at the bottom left, which stands for  “Rural Free Delivery.”  This was used in rural areas for houses that did not have a street address.

Ruby Stubbs, appears on the 1900 Federal Census in Abbeville, as the youngest child of George W. and Maria Stubbs. Her older siblings are Annie, Mary L., Emmett, Homer and Hassan. All are born in Georgia, with Ruby’s date of birth showing as about January 1890.

In response to contact from a reader that has another postcard addressed to Ruby and was wondering if there was an address for her, I had looked for more info, no address found but here’s some additional info:

“I don’t have an address other than what the 1900 census shows when Ruby was about 10 years old, which is just the town of Abbeville (specifically Militia District 1158 written at the top of the census page) in Wilcox county. Looking at random pages on that census, it seems their were no house numbers, or even a road listed, for any of the town’s residents at that time. I do see that their father, George W. Stubbs, unfortunately died later that year, in July 1900, and the 1910 census taken in Abbeville shows the mother, Maria and three of the adult kids were living next door to Ruby’s older brother Hassan (Samuel Hassan Stubbs) and his family. Ruby had married James F. Nance, October 7, 1909.”