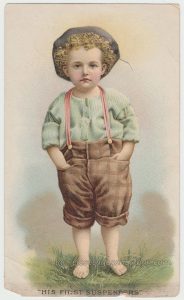 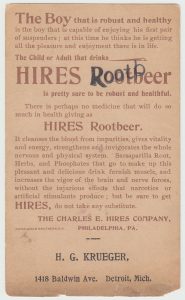 This trade card is not in the best condition, and certainly not rare, so might be of most value to the H. G. Krueger Family and their relations. The back touts the health benefits of Hire’s Root Beer, made from  “Sarsaparilla Root, Herbs and Phosphates”  and draws the correlation:

Herman G. Krueger was a retail grocer in Detroit, per the city directory listings 1895 – 1912 for 1418 Baldwin Avenue, which was both his residence and business address. (The name Krueger is not to be confused with Kroger’s which was founded in Cincinnati by Bernard Kroger.) However, two census records and most city directories show Herman G. Krueger as a carpenter, specifically a joiner, by trade. Prior to the Baldwin address he lived at 264 Watson St.

Herman, according to the 1900 Federal Census for Detroit was born March 25, 1862 in Germany, married to Emile, born Germany, September 17, 1872. Their son, Elmer A. Krueger, was born in Michigan, November 30, 1898. (The 1900 was a lovely census, giving full dates of birth.) The Krueger’s address was the 1418 Baldwin Avenue one, and Herman’s occupation is joiner. The 1910 finds the family still at the Baldwin address and with additional children:  Dorothy, Herman, Jr. and Mildred.

Baldwin Avenue is today known as Baldwin Street, however, the street numbering is different now. In the Krueger’s time 1418 Baldwin Ave. was located around the cross street of Hendrie, some blocks north of Gratiot, whereas today, 1418 Baldwin St. is located a block north of E. Lafayette, so, not far from the river.