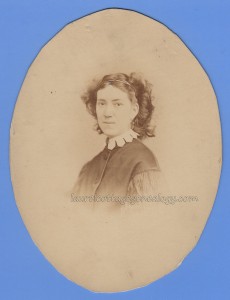 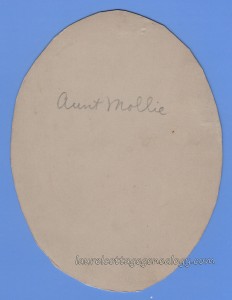 Here’s an interesting photo of a lovely young woman named Mollie, and she was somebody’s “Aunt Mollie” per the writing on the back. The photo was found without the frame it was once in. Her outfit reminds me of something one might wear on stage. The collar is very unusual with it’s heavy notches, and if you look closely it doesn’t appear to go all the way around. Was it something the photographer used for some reason – maybe he decided her outfit needed something extra at the neckline? Her coat or jacket also is unusual. It looks like it might have been leather; we can see that the back was in a lighter shade. To the just off-the-shoulder sleeves were sewn…hmmm…a soft crinkly fabric, or was that yarn or some type of long haired animal fur? I’m imagining she played a “lady Robin Hood” in a theater production, a benevolent highway woman. (Wonder how hilariously far off this thought is!) But there’s a kind of a medieval look to her clothing style.

This next photo was found in the same bin (somewhere on the Central Coast in California, Salinas or Gilroy perhaps, now I forget and I should have written it down.) For some reason I first thought they could be the same person, but looking at the photos later, I wonder why I even thought that (!). However, the two could be related. No name or photographer name on this one, but whoever she is, she’s very beautiful and in a much more traditional high-collared white lace blouse. 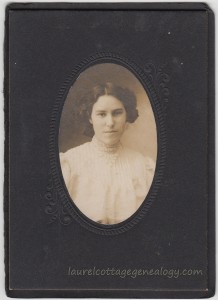