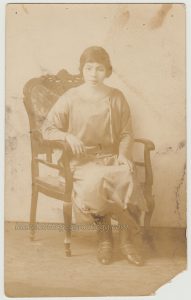 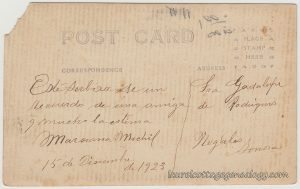 A Real Photo Postcard of a pretty young woman who looks to be in her early twenties, in a photo of the same era, early 1920s that is, wearing the unmistakable drop-waist dress –   too bad we can’t know the color, and note the beautiful bead work or sequins at the cuffs, neckline and at the vertical overlay flap (there must be a term for this part but I’ll be darned if I could find it) and and wearing double-strap shoes with button closures. The message on the back is:

The above is most likely:   “Francisca Guadalupe de Rodrigues”  and the city of Nogales is located in the Mexican state of Sonora, and is on the border of Arizona.