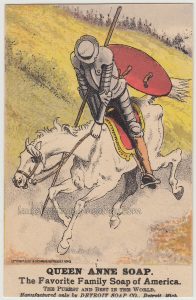 Here’s an unusual choice for a trade card image, sort of:  a knight on a white horse, thundering down a country road. Looks like he’s on a mission, or exhausted coming back from one. You would expect to see a more victorious image of a knight in armor, the well-rested horse and rider….majestic bearing, etc. But that’s one of the great things about pursuing old trade cards:  finding the unexpected. Musing on an idea now…of things being less standardized decades ago. Makes sense, and sounds like a good theme for a college paper. Or, maybe more accurately, how images evolve over time. But back to the trade card, which shows:

“Queen Anne Soap. The Favorite Family Soap of America. The Purest and Best in the World. Manufactured by Detroit Soap Co., Detroit, Mich.”

From Detroit Free Press newspaper ads and articles the Detroit Soap Company started up in the summer of 1881, or shortly prior, and were originally located at Dix Avenue, between 24th and 25th streets in Detroit. The company was managed by Samuel Post of Ypsilanti, and his sons William R., and Samuel, Jr. (The time-frame for the sons was not researched.) A fire on May 7, 1898 destroyed the Dix Ave plant which then stood abandoned for at least a couple of years. Sometime after the fire in the same year, 1898, the factory was re-built at a different location on 25th St. and another constructed at what was the foot of Leib St. on the riverfront, just west of Mt. Elliott Ave and kitty corner from the western edge of Belle Isle. Queen Anne Soap stores were located on 77 Woodward Ave in Downtown Detroit, as well as in Saginaw, Grand Rapids and Toledo. In 1915 the Detroit Soap Co. was sold to Lautz Bros. & Co., making that a pretty good soap-making run of about thirty-four years.

A couple of “buy local” requests from about 135 years ago….so timely for today, eh? 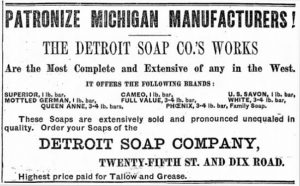 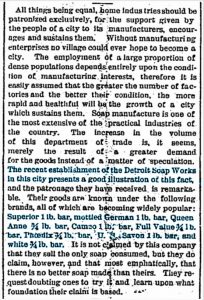 From the top, Michigan in 1881 is still considered to be  “in the West.”  And from the article above,  “All things being equal, home industries should be patronized exclusively, for the support given by the people of a city to its manufacturers, encourages and sustains them. Without manufacturing enterprises no village could ever hope to become a city.”  Funny to think of Detroit as a village, but then in 1881 that village image was not as far removed, time-wise. Fast forward to today, in 2016, and here we are talking about, getting involved in, and cheer leading for, the continued resurgence of the city of Detroit. (If one could be in two places at once…anyway, Luv baby, 313 😉 )

Fire at the original building on Dix 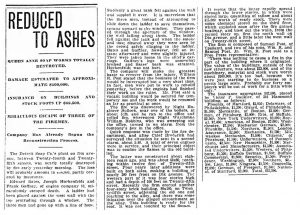 From the above, seven fire engines were called to the scene, firefighters Edward Bates, Joseph Hockenfeldt and Frank Gaffney of Engine Company 10, miraculously escaped death. Other names mentioned are Fire Chief Broderick and Night Engineer Bullock who discovered the fire and Night Watchman, William Robbins who sounded the alarm. 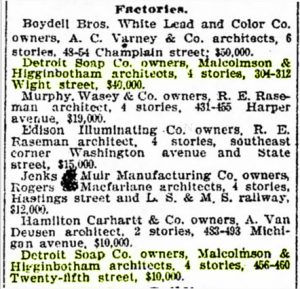 According to the above, which was under the heading,  “Building in Detroit in 1898. Operations show an improvement despite contrary figures”  it appears the company re-built at a different location on 25th Street, as well as building a new factory at 304-312 Wight Street. The Wight St. address must have been what became referred to as “foot of Leib St.” and would be the location in the drawing below. 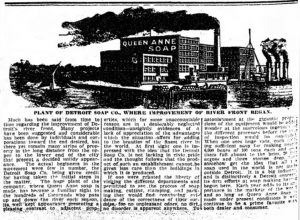 The riverfront location for the Detroit Soap Co. was at the foot of Leib Street, just west of Mt. Elliott Ave, at what is now the Harbortown area. Leib is no longer at the river, only a portion of it remains, a little further north. Present-day:  check out the Detroit Riverfront Conservancy website, mouse over “The Riverfront” heading at the top to get “Before And After” photos of the riverfront (awesome transformation!)  Below, that’s part of Belle Isle at the bottom right on the 1901 map.

The partial Riverfront map above is from Polk’s city directory for Detroit, 1901. It’s a great reference if you’re looking for a city map from this era, and will be found at the beginning of the directory, right before the cover page. 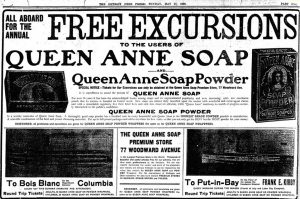 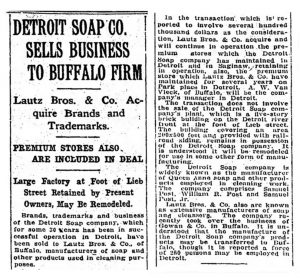