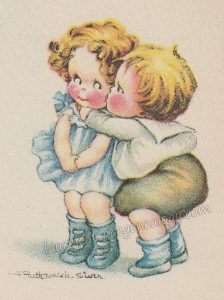 Cropped from an earlier post, an illustration by artist Ruth Welch Siver, circa 1922.

Numerous examples of this artist’s work can be found on old postcards and valentines, but nothing was showing up about the artist. So, we went hunting and found the answer in the puzzle pieces that are made up of newspaper archives, census and vital records. We discovered that Welch was Ruth’s maiden name and that she had established herself as an artist prior to her marriage, so it only made sense that she kept Welch in her signature, at least for some time. (And perhaps her prior work, for which we find no example, would have been under Ruth K. Welch.)

Below, the clipping from The Topeka Daily Capital, dated March 26, 1920 which confirmed the artist’s identity:  “Mrs. Siver, who is an artist, is having much success making post cards for the New York trade.” 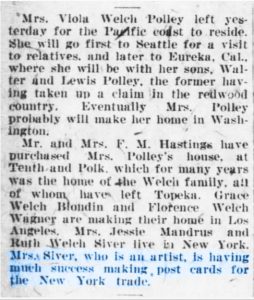 The 1900 Federal Census for the Welch family in Topeka shows their address as 709 Topeka Avenue, and Ruth’s occupation as artist.

Below, two clips from The Topeka State Journal, November 1900 advertising Ruth’s exhibits at Unity Church. The Sichel reference is to German-born artist Nathaniel Sichel (1843 – 1907). (And we wonder what happened to Ruth’s “The Queen of the Harem” painting.) 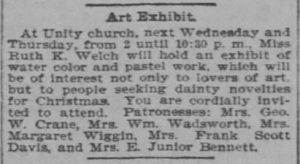 A specialty in  posters and ad designs

The following clips from The Topeka Daily Capital, Jan. 4, 1905 and The Ottawa Daily Republic, Jan. 3, 1906 inform us that Ms. Welch was working in the poster, advertisement and calendar field; of particular mention in both articles is the well-known Santa Fe railway calendars. See D.L. Briscoe’s tribute:  “Santa Fe Calendar History” for background. 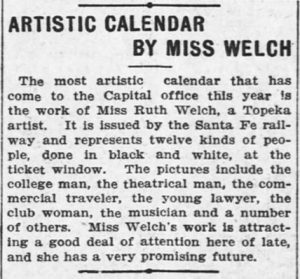 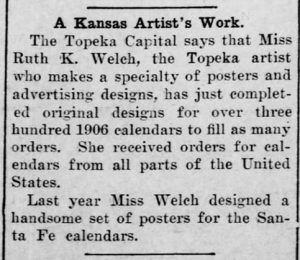 Below, two ads, run by the artist, that appeared in The Topeka Daily Capital, May 1904 and February 1905: 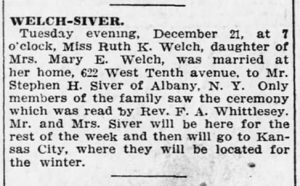 Ruth Welch Siver died October 7, 1933 in the Bronx, New York, and though we wonder what became of her earlier work, her charming illustrations in the valentine and postcard industry, with their cute, funny/quirky captions, live on.