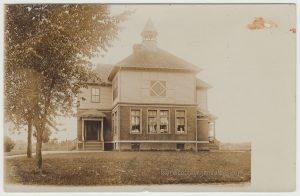 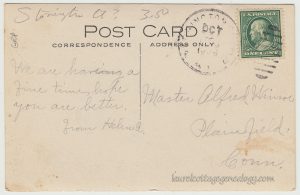 You won’t notice the “1891” on this house unless you click on the image. And often the details of a photo are not found until it is scanned and enlarged (mentally rubbing palms together in anticipation – you never know what coolness might be revealed). In this case I was thinking we might see someone appearing in one of the windows, but did not expect to find what may be the year the house was built, appearing stylishly displayed in big numbers in the center of the second story. (Or could the 1891 be a house number? Doubtful.)

A town ending in….

No matches were found for this beautiful structure (hope it’s still standing) in online research, but we only looked in Connecticut, and didn’t look too extensively. The postmarked town, and thus potential house location, appears to have ended in “-ington” so if it was sent from CT it would have been Ellington, Farmington, Newington, Southington, Stonington or Torrington. Someone, maybe the previous vendor of this card, was guessing Stonington, per the writing at the top.

After reviewing 1910 census records and an Ancestry tree online, we find that most likely this RPPC was sent from Helen Ashley who was the cousin of the recipient, Master Alfred Winsor of Plainfield, Connecticut. Helen, or maybe her mother, wrote:

“We are having a fine time, hope you are better, from Helen A.”

The cousins would have been about 9 years old at this time. Helen is the daughter of Alfred D. Ashley and Alice Lewis, and Alfred is Alfred Ashley Winsor, son of Edward N. Winsor and Susan F. Ashley.