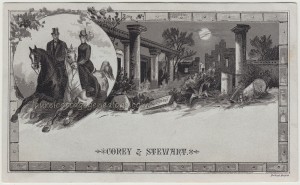 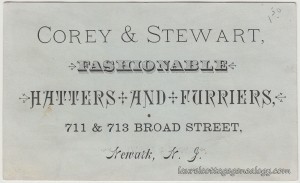 As of the date of this post, no other trade cards were found online for Corey & Stewart, which is a little surprising because they were a very successful firm. It’s another lithograph print by Bufford (new category going up) and a great design, in black on pale green, of the Roman ruins of Pompeii in the moonlight with an insert of a very fashionable couple on horseback.

The wonderfully detailed description below (we expect nothing less from the time period it was written, but thank you) is from William F. Ford’s The Industrial Interests of Newark, N. J….(1874) and reveals that Corey & Stewart was established in 1852 by James W. Corey, who was joined by James H. Stewart in 1863. 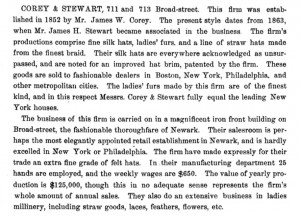