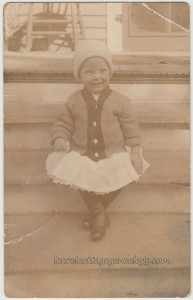 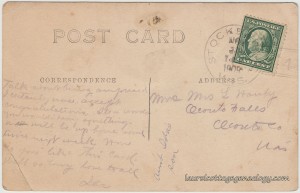 In 1909, when this postcard was sent, little boys were still wearing dresses, so this photo would not seem at all unusual back then. Dresses for infants and toddlers were gender neutral and white clothing, and of course diapers, were able to be bleached. The sweater he wears perhaps made the dress stick out more than it normally did. And we’re just going by what the back says for i.d. – someone later on had written in pen,  “Aunt Ida’s Son.”  But it’s a beautiful photo of a happy baby on the porch steps. His name is unknown, as confirmation was not found on the addressee, nor for Ida’s last name. The postcard was mailed from Stockbridge, Wisconsin, which is about sixty miles south of Oconto Falls, and the sender writes:

“Talk about being surprised. I certainly was, accept congratulations. It’s a wonder you wouldn’t say something. Will be up home some time next week. How do you like this card. Well so long love to all. Ida.”