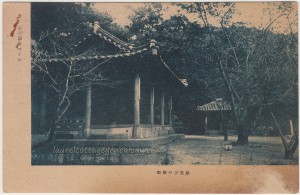 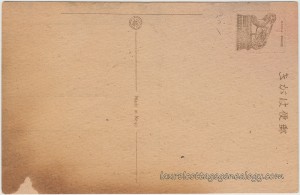 It was just by happy chance that this postcard was put up after the prior one (also regarding Seoul.) So, we’ve got a short theme going here. This one is from sometime between 1910 and 1945 when Japan occupied Korea. But arrgg (!) translation is difficult. The language is Japanese. From the front side, top left:  the first character, if taken by itself, translates as “white;” the second character, if taken by itself, translates as “river.” I’m not sure what the next two represent but the last three characters translate as “hotel.” It’s seems likely then that this photo was taken on the grounds of a hotel, possibly in what is now Seoul, South Korea, but the exact location will be unknown until we get a professional translation. But we know the time frame because of the printing in the divided line on the back which says  “Made in Keijo.”  Keijo was the Japanese name used for the city of Seoul during the colonial time period. The city had prior names, as well as Chinese names.

The stamp box is very interesting and shows a mythical figure from Korean and Chinese culture called a haechi or haetae or xiezhi (in China) and the words  “Kaida Brand.”
We’ll find out more about the postcard publisher when we get a proper translation. But the figure in the stamp box is described as a lion or dog-like beast with a small horn on it’s forehead (but not always seen with the horn) and a bell in or around it’s neck. This wonderful creature has many attributes, among them the ability to see everything, judge between good and evil, move backward and forward through time, and protect against disaster. It is often seen in Korean architecture, and since 2009 has been the official mascot of Seoul. And in the Republic of China can be seen on the badges of the military policemen, and is engraved on the gavels of the law courts of the People’s Republic of China.

Last but not least, this postcard seems to be a pretty rare find; no others have been found online, as of the date of this post.