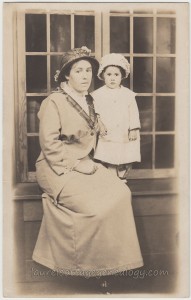 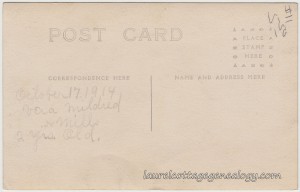 The photo for this Real Photo Postcard was taken on Vera’s birthday, October 17th. As the back of the postcard states she is two years old here. And this would appear to be her momma with her, due to the strong resemblance. The 1920 Federal Census for Compton Township, Los Angeles County, California shows Vera, age seven, born in California; her parents Samuel C. Mills, an iron worker, born in Kansas, about 1881 and Frances R. Mills, born in Utah, about 1893; and Vera’s brothers, Clifford C., age 3 and 4/12, and Victor L., not yet one month old. (This census was taken January 12th.) Both the boys were also born in California. The parents owned the residence on Euclid Avenue. By 1930, there was another addition to the family, Jack A. Mills, born in California, about 1927.

Vera married Robert James McCarty on September 2, 1932. The marriage record (which lists Vera as Mildred Vera Mills) gives her mother’s name as Ruth F. Heninger. Robert McCarty, native to Illinois is age 22, and his parents are Benjamin E. McCarty and Mabel A. Voigt. The marriage took place in Los Angeles. The death record for Vera (April 26, 1990) does also list her as Mildred V. so it seems she preferred Mildred as her first name. This was not uncommon for the first and middle names to get switched around at some point. And Vera’s mother may have done the same, since she’s on the 1920 as Frances R. Mills.

Anyway, this is a beautiful photo, I think we’re safe to say of mother and daughter, both of course in hats (!) for the occasion of Vera’s second birthday. It’s an indoor photo, as you can see, with Frances seated at a window seat, holding Vera who stands just next to her. I like Frances’ plaid trimmed jacket.