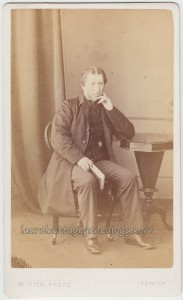 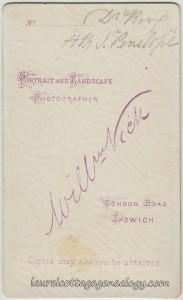 See the update below for the name of the sitter…..thanks to one of our readers.

This is a Carte de Visite showing a photo of a gentleman posing for a formal portrait:  A pensive pose, with a book in his right hand and chin lightly resting on his left; seated next to, and with elbow resting on a small end table. His name appears on the back but is difficult to decipher:  The first word clearly looks like “Dr.” with the last name starting with “R.” Underneath the name is written  “H.M.S. ‘Penelope.’ ”
(The back of the card was darkened a little in the scanning process, to better show the wording.)

There were nine ships of the British Royal Navy bearing the name Penelope. This particular vessel was the fifth of nine; an armoured courvette (small warship) or ironclad that was launched in 1867 and broken up in 1912. An ironclad was a steam-propelled warship that was protected by iron or steel plates. This Penelope was the last ironclad to be commissioned in the Royal Navy. 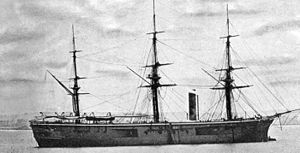 Though the identity of the man in the photo was not found, that of photographer, William Vick of London Road, Ipswich was. He appears with his wife and children in the 1871 and 1891 England Census, and in directory listings ranging from 1874 – 1892. The 1874 directory shows Clarkson St., Ipswich, but starting in 1875 he is listed on London Road; the same address that appears on the back of this Carte de Visite. A more detailed post about the photographer will go up after this one.

UPDATE:  The subject of the photo is most likely the Reverend Doctor Bartholomew Ring, LL.D. (1825-1903). See the very informative comment from a reader, who has also replied with more information on the photographer.