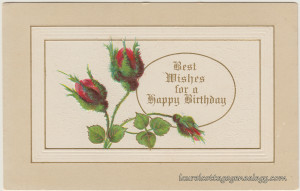 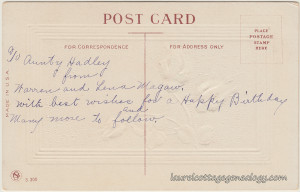 Warren and Lena Magaw are on the Lawrence, Kansas 1910 Federal Census, brother and sister, ages four and two, respectively. Their parents are W. C. and Emma Magaw (Cyrus Webster Magaw and Emma Henrietta Biery on an Ancestry.com family tree.)  I don’t see any other possibilities for the senders of this postcard, but who is Aunty Hadley? Hadley is definitely not a common girl’s name (but so cool) and one would assume that it’s the receiver’s first name, but both first and last names were checked as possibilities. Perhaps it was a middle name that she used that isn’t showing up in records, or a nickname for Harriet. Relatives and in-laws of the Magaws were checked.

As to the design of the card, it shows a branch of a rosebush showing three red rosebuds, on a white background, with the caption in gold,  “Best Wishes for a Happy Birthday.”  The card is lightly embossed and has a wide tan border.