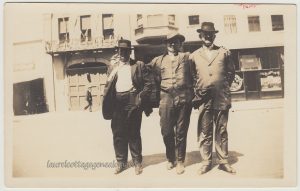 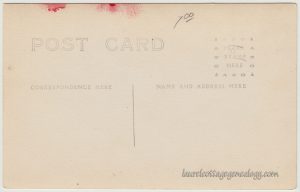 I believe these guys, or at least the two on our left, may be brothers, due to their resemblance to each other, though admittedly, there is a tendency to see family links where there may be none. Human nature, I think. Or, you might just imagine them as buddies or business partners. We wonder where the photo was taken. That looks like an American flag flying from that second story window on the left, crossed with another flag, which we can’t make out. Those could be decorations for some type of celebration draped over the iron balcony, like trimmings in support of an upcoming or just past Independence Day parade. The only wording that’s easily readable on the buildings behind the gents is “Free Reading Room.” Though, some historian might be able to recognize the design on the window to the left of the door to the reading room, which would be a possible clue for location. Oh, then there is some other wording showing – that last line looks like a name that starts with “McShe…” something Irish or Scottish. Easy to miss, but it’s on the building showing between the two guys on our left.

Last but not least, the stories from the background….a guy walking, and two older guys seated, passing the time of day, inside a business probably, some place that needed a large doorway, maybe for deliveries. 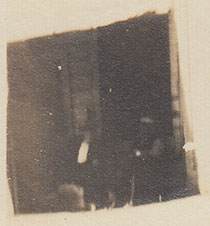