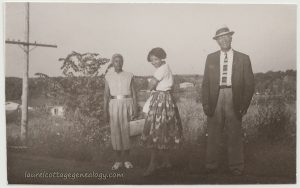 An African-American family possibly taken in Michigan, where the photo was found. Were they on their way out to breakfast or church? Was the location a vacation spot for them or taken near home or were they visiting relatives? We’ll probably never know unless by some amazing serendipitous event someone’s browsing and happens to recognize these people. Not unheard of. I’ve been reading Henry Z. “Hank” Jones, Jr.’s Psychic Roots, Serendipity & Intuition in Genealogy.”  If you do family research, for example, chances are excellent that you can recount multiple instances of that feeling of “being led” to a spectacular find. Or, on the opposite side, if you sell or post family photos or other items you may have a story of someone walking into your store and finding their relatives’ “lost” family album, or seeing someone happen upon a postcard that they themselves had written and mailed fifty years ago. In our talks with sellers we’ve heard a surprising number of such accounts. The kind that make your hair stand up on the back of your neck (in a good way!). Here’s one from my family:

Maybe fifteen or twenty years ago, I’ve forgotten by now, I was with some family members vacationing in Montréal. Sitting on the beds in the motel we were trying to figure out what to do for the day, looking at brochures. I was drawn to the one on the Pointe-à-Callière Museum and felt we “had to” go there, that it was important to go. In one of the exhibits we saw an artist’s rendition of a mother holding a child. Standing in front of this drawing I had a strong urging to take a photo. Immediately the thought came into my head,  “Why? It’s not like you’re related to her or anything.”  Ahhh, but as you’ve guessed 🙂 she (beautiful Charlotte, specifically Marie Charlotte Gloria dit Roch or DesRoches) turned out to be, not just any relative necessarily, but mine and my siblings’ 6th-great grandmother. (See Collections archéologiques for a photo of the handle of a tool? with Charlotte’s name carved on it. This was one of many artifacts that had been uncovered at the site of what is called “the birthplace of Montréal” and what later became the museum.) Now, at that point I hadn’t yet researched that particular line, and had never even come across her name. It was not till a few years later, while searching my Dufour side online, and “climbing the tree” by finding my direct ancestor Pierre Dufour that there, lo and behold, was his wife, Charlotte Roch. Wait, what??? (Jaw-dropping, falling out of chair.) Not the end of the story, though. For about a week after that, what seemed like every time I got into the car, I heard Chuck Berry’s, “You Never Can Tell” either just playing or as the next offering by the d.j. You know the lyrics, ♪ “It was a teenage wedding and the old folks wished them well. You could see that Pierre did truly love the mademoiselle.” ♪ True, Pierre was not a teenager when they wed, and though Charlotte was, that was not unusual in the least at that time, but it was the true love part that seemed to be the point of what felt like a message bridging “time.” (What is time? 😉 ) Records show that Pierre and Charlotte had eleven kids and, of course, have many many descendants. Notable is the birthplace of their second child. Their first was born in Montréal, and the youngest nine in Detroit. But the baptismal record (all are in French) for their second child, Marie Charlotte Dufour, states she was born in the  “8yattenons.”  (French-Canadian priests sometimes wrote a number to denote a sound or abbreviate a word, for instance “7bre” for septembre, which by the way, can be confusing when reading the record, the digit 7 but the 9th month!) The appellation 8yattenons was used for Fort Ouiatenon. This has been verified in other unrelated records, and the fact that Pierre was a soldier when he and his young family left Montréal adds credibility to daughter Charlotte having been born at or near this fort. Well, this ended up to be a lengthy sidetrack off the subject of this post, that of the vintage photo from the 1950s, yikes! But definitely, if you’d like to share your own stories of the serendipity-amazing luck-small world type we’d love to hear them.

Back to the photo…..

Amazing how every photo transmits so much. An everyday moment maybe, but no less special, as when we look we see the smiles, and the grace and humor, maybe get a sense of the struggles, and yet the joy, in a backdrop, no, make that of a oneness with, a particular place and time, and somehow in total it all washes over us like a blessing…. No identifying info on the back, but maybe we’re looking at a photo of a husband and wife and mother or auntie or older sister of either? All three are very stylish. Love the striped tie on the gentleman. I think of him as Clarence (heehee, he’s likely laughing somewhere now). There’s the flashy belt the older woman wears that’s caught the lens light……there’s the very chic pose of the younger woman, and….her skirt. Check out the pattern on the fabric, a surprise and a delight:  Chickens!

2 thoughts on “Photo Op By The Lake”