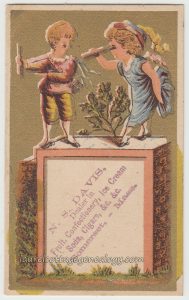 Another grocery-type trade card, this one with the owner’s stamp fitting neatly in the blank area on the card, just as it was designed to do. It shows two blond children with spyglasses. And the clarity of the image is not too good, but still, this would be an amazing find for someone searching for N. S. Davis in their ancestry or just nice for collectors of Somerset or confectionery trade cards, in general.

Dealer in a little of almost everything

We find N. S. Davis is Nathan S. Davis, from his 1870 ad below in the Somerset city directory, and he offered a wide variety of items. But is he also the Nathan S. Davis, sea captain, born 1828, that appears in directories and census records?

Getting a little bleary-eyed looking up the many records under this name, but we see that there was the Nathan Simmons Davis (1828 – 1918) son of Nathan Davis and Clarissa (Bowen) Davis, who lived in Somerset, served as a U.S. Postmaster and was a sea-captain, and there was Pvt. Nathan S. Davis (1828 – 1887) from Somerset, son of Baylis and Nancy Davis, who served in the Civil War and was listed as a mariner at the time of his death. Which one was also the confectioner who gave out this trade card is the mystery. And wouldn’t you know it, the spyglass theme fits both of them perfectly (not to mention this was the Atlantic seaboard region, so nautical was common in general, one assumes.

See the posted comment for details, but our store proprietor for this trade card has been confirmed as the Nathan S. Davis, son of Nathan Davis and Clarissa (Bowen) Davis.